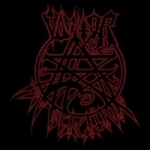 Australia’s Death Metal warriors VOMITOR have returned with their third album which underlines the fact that they are easily the best and most uncompromising purveyors of old school – nah, that still sounds too modern – primeval Death Metal out there. If you consider a band like ASPHYX Death Metal dinosaurs, this commando here is a fossil bacteria from the Precambrian. Heavily inspired by the "In The Sign Of Evil" / "Obsessed By Cruelty" era of Germany’s SODOM plus influences from various 80s Thrash groups like early SLAYER, DARK ANGEL, HELLHAMMER the ultra primitive, raw sound should find lovers actually more easily among Black Metal maniacs than your average Death Metal fan. "The Escalation" is an anachronism, it negates progress or production values of today, it’s a corpse still raising its middlefinger in rigor mortis. While I personally find the vocals somewhat repetitive due to being hardly more than possessed bellows & screams soaked in reverb, the merciless riffing and fucked up, drunken vibe of songs like ‘Metal Or Die’ or ‘Prayer To Hell’ is highly entertaining especially when you have had as much booze as New York’s got snow at the moment. "The Escalation" is an excellent example of, let’s quote DOA here, "We don’t care what you say – FUCK YOU" proto Death Metal and if you are looking for extreme sounds with technique and finesse, you could not be more wrong. If 30 minutes of mayhemic, rotten metal pleasure with maximum "aaarrrrggghh!" – factor are totally up your alley, get this! www.invictusproductions.net, www.ironbonehead.de