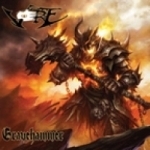 Skull-splitting, hammering and early 90s-styled American Death Metal… anyone? Hands up! VORE hailing from Fayetteville, Arkansas, has been around since 1994 already – and during their whole existence the band has recorded one demo, an EP and three full-length studio albums, off which their latest record, "Gravehammer", has now been unleashed. A cool thing about VORE is, they have stayed very loyal to their sound ever since they started making their deadly noize in the underground Death Metal scene – and on "Gravehammer", the band’s pure loyalty towards their original Death Metal sound, has pretty much remained unchanged. Even if VORE hasn’t even tried to attach any new components into their own, old wheel – and kept it rollin’ smoothly the same way since they have done since they released their 6-track "Dead Kings Eyes" EP in 1997, there’s still something strangely appealing in VORE’s sound that makes one to return back to their releases every once in a while. Call it some sort of need for some nostalgia or whatever, but that’s what they do anyway. On the band’s new 9-track opus "Gravehammer", the guys churn out their mid-paced, chunky Death Metal somewhat convincingly, following tightly the same traditions what bands like BOLT THROWER, CIANIDE, ASPHYX and the likes, have been flagging for several years already. Heavily riff-laden, chugging and shit-heavy Death Metal this is – and if you are still into digging this type of stuff, then nothing stops you liking "Gravehammer" either, I believe. The VORE guys still have it, and they should be proud of what the band is all about musically – plus, naturally what they have accomplished on "Gravehammer" as well. A nostalgic trip to the past times of Death Metal has well been served on "Gravehammer", so at least now you know what you are about to get. www.vore.org