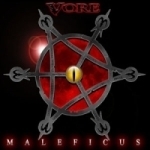 While other Death Metal acts more and more tend to focus on highspeed brutality or technical extravaganca, Arkansas based VORE still prefer to stick to their rather midpaced, rhythmic and simplistic style. Really a wise decision considering the big amount of releases that totally sound like HATE ETERNAL, KRISIUN or similar acts these days. “Maleficus” is already the band’s third self-financed CD (following 2001’s “Lord Of The Storms” MCD and 1997’s “Dead Kings Eyes” full length) and features 6 songs as well as two instrumental pieces. The first one, ‘Legions Of Martyrs’, is kinda like a short intro to ‘Misery Embrace’, which is followed by an acoustical guitar piece named ‘Ashes’. Just like its predecessor also this album was recorded at Buzzwo Studios in Tulsa, OK by Aaron Allen again, yet it sounds heavily improved. Blame it on an increased overall experience level or the completely new rhythm section (Remy Cameron and Jeremy Partin replaced former members Brian Marcinkiewicz and Glen Wheeler on drums and bass respectively)… Fact is that the new material comes across a lot tighter sounding and in terms of the precision and heaviness could only be compared to an act like BOLT THROWER. Both guitarists (Page Townsley and John Voelker) still share the vocal duties, but somehow I got the impression that the deep Death Metal voice has also become a lot stronger these days. The songs partly recall the doomier side of MORBID ANGEL mixed with the already mentioned intensity of BOLT THROWER, which means rather slow riffing backed with strong doublebass drumming. Because of that “controlled intensity” the whole album delivers an overall fascinating tension. So, without betraying their own musical roots, “Meleficus” turns out to be a big step forward for the band! Impressive! For further info or ordering details check out www.vore.org