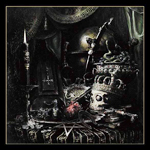 When tracks started appearing online from the Swedes’, then, coming album "The Wild Hunt" I was rather shocked, as some of the first tracks I heard on Youtube was ‘They Rode On’ and the titletrack, not really your off the rack WATAIN tunes. But again, a couple of tracks off the usual Black Metal path, the band has beaten us with during their career, is acceptable and they’ve done like that before. Though the album was released and brought home, and the listening begun, and there was much more of what the two already mentioned tracks offered. A journey into what started on "Lawless Darkness" and especially ‘Waters Of Ain’ and beyond, giving us the full WATAIN specter and much more. What first hit me was the incredible mix of WATAIN’s heroes, the grand epicness of mid-career BATHORY, the cold and eerie melodic atmosphere from DISSECTION and then a futuristic sound picture not far from what THORNS once did, I guess the "Grymyrk", "Trøndertun" and "Thule" tapes have been stuck in E’s cassette player back in the days, which already has been revealed before in the band’s music. It almost feels like WATAIN have dissected their sound, and have taken the bits and pieces and turned them into a deconstructed version of themselves. Indeed not what many of us expected of the mighty Swedes, but I guess they have it in their blood, to turn around on their peak and re-invent themselves. I can easily see why a fan or two of the band would be disappointed with "The Wild Hunt", I back in the day, got very frustrated when one of my favorite bands changed style or direction, if I couldn’t relate to it. It has gotten quite easier to relate to things as the years have passed by, and the amounts of music that have been digested have grown. This is a quite progressive release for a band that is known to be the most evil amongst evil, the blackest amongst black, the most brutal and relentless amongst the brutal and relentless, and now they are up there with OPETH and delivering progressive Metal, even though you can’t blame WATAIN for having lost their roots, they might have embraced them, quite literary. I used a bit of time to embrace this release totally, after the initial listens on Youtube before the album was released, I gave the albums some spins on Spotify, before buying the release, and still continued to listen to "The Wild hunt" almost daily, and I still continue to discover new things here and there, it takes time, but it’ll repay you. And as I have the Mediabook release, there is a bonus track included, a re-recording of the first written WATAIN track ‘When Stars No More Shine’, and that is pure WATAIN onslaught, and after giving the full album a listen, it actually fits quite fine into the whole, and embraces the overall atmosphere really well, a cycle being closed? No matter what, the re-recording of the old legendary track shows that atmospherically and idea-wise, WATAIN have been headed the direction "The Wild Hunt" brings us, all along the way, knowingly or unknowingly. There is a thin line between madness and genius, and WATAIN is balancing on the razors edge with this release, which is a nice refreshing blow, a great merger of WATAIN’s influences into a new great whole, which is both epic and breathtaking, without losing the Black Metal roots for good. This will become legendary. More info at www.templeofwatain.com, www.facebook.com/watainofficial, www.centurymedia.com