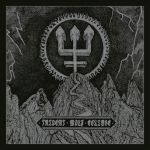 WATAIN are back… and they are still quite a force to be reckoned with! "Trident Wolf Eclipse", their sixth album and the follow-up to their somewhat controversial "The Wild Hunt" is a serious case of Black / Death Metal… in fact, a bastard child of the rawness of BATHORY with the melody and speed of DISSECTION, but they try hard at upping the ante in production and sheer aggression. Do they reach their goal? It’s not really a competition I guess, but their ability is nothing short of remarkable. They mix passages of the most brutal and fast Black / Death in old MARDUK’s style (like the bombastic opening track) with grandiose, even operatic moments (like in ‘A Throne Below’) without falling at all into the symphonic commercial stuff like DIMMU BORGIR. But they tread a bit of a razor’s edge and it must be tough not falling either way… that is much of the reason why the previous album took such bashing. They became too big to still be an Underground band, but they do not want to lose that spirit, while at the same time they strive to be at the forefront of their niche. It must be problematic sometimes, I guess. But in my opinion they very much succeed here. Despite the melody, they never sound wimpy and, on the contrary, they are very often surprisingly skilled at mixing their musicality with primal, atavistic brutality from the original development of the scene (listen for example to all they cram into the incredible ‘Sacred Damnation’)… they sound often fresh; to my ears they never really sound like all the names they are often lumped with, like SATYRICON, NECROPHOBIC, you name it. Musically, the sound is rich and full, and this applies both production and composition-wise. Necromorbus studio outdid itself here! The drums are often insanely fast and often sound huge, and the rest of the instrumental follows suit, but there are many moments of slower pacing, like the final track. It takes a number of listens to fully digest all the layers of this work. These guys are all excellent musicians and performers as individuals… but together they add up to something that justifies their notoriety. Because of this, as a Black / Death Metal band, WATAIN certainly excels! A truly fantastic album! More information at: www.facebook.com/watainofficial, www.centurymedia.com