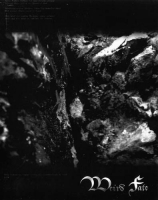 WEIRD FATE is a German Black / Dark Metal outfit formed in 2001 and is now presenting their first demo-CD called "Seelenmacht". This band is a good example that taking time for development is a very positive circumstance. This is really talented, as far as musicianship is concerned as well as in songwriting-matters. "Seelenmacht" offers 8 tracks, 4 of them in an atmospheric Black / Dark Metal vein rich of variety, the other 4 songs are calm acoustics. The strength of WEIRD FATE is definitely the creation of a gloomy atmosphere which unveils best in the slow parts with slowly played guitars (partly clean / just slightely distorted guitars), piano and keyboards, as well as in those 4 calm acoustic songs. The faster parts in contrary are neither really fish nor really flesh, because those lack of extremity, although this fact should not diminish the quality of "Seelenmacht" too much. I take this demo as a very good sign for what may come from the WEIRD FATE camp in the future, because as I said before, this is a talented band unlike many others. You should in every case have a listen to "Seelenmacht". www.weirdfate.de.vu