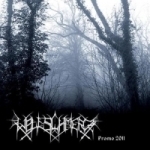 Despite their German monicker and the fact there’s an American (which changed name already) and a Swedish WELTSCHMERZ, this is the Dutch one and hail from Amersfoort. More important, they’re good at their game performing Black Metal in the well-known Norwegian style. The bandpicture shows these Guys are pretty young, but sound pretty mature. Everything just fits. The tracks ‘Ending Your Life’, ‘Homo Homini Iupus’ and ‘Mysterium Iniquitatis’ are variating especially ‘Homo Homini Iupus’ which is a real highlight. Hreim’s vocals are raw but understandable and abscent from any high pitch screetches. They reminded me more of Daniel Corchado than any typical Black Metal vocals. Drumming is controlled and inciting with speed added when needed. The bass is very well audible thanks to a well done production at Independent Recordings. On top of that, the riffing is not pure aggression but more melancholic with an overall feeling that came close to SATYRICON’s “The Shadowthrone”. Maybe not a strong comparison, but if you’re into Black Metal you should check this out ’cause this promo reminds of the Norwegian scene when it was still exciting. Didn’t except something like this to emerge within the Dutch borders, so this promo turned out to be a pleasant surprise! WELTSCHMERZ released the “Cry For War” EP which later got re-released on tape by Zwaertgevegt. Can’t tell you more about this, but the level on this promo shows they’re ready for more. Check the following address for more info and clips: www.myspace.com/weltschmerzmetal