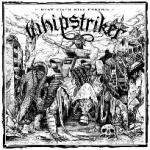 WHIPSTRIKER is a four piece active since 2008 already and hailing from Rio de Janeiro. After dozens of split releases and two full-length albums, they finally present their third opus called “Only Filth Will Prevail” with eight own tracks and a nice WARFARE cover. The band plays a dark and obscure mix of classic Heavy Metal and 80s Thrash Metal but also some notes of early Black Metal in the vein of old BATHORY or VENOM can be traced in their sound. With a very punky attitude the four guys thrash themselves through the very cool and old school named tracks. These are brought forth with some really aggressive and raw vocals and give the songs a really old school painting. The guitars are heavy as fuck sounding really old school and the leads really make all 80s lunatics scream for more. But the band also slows down the pace here and there and show their calm and sometimes nearly psychedelic side. The nine tracks including the covertune are straight to the point and with only 28 minutes running time a cool and diverting trip to enjoy in the car with a modern and well-fitting production. But really only recommendable, if you enjoy stuff from the 80s or bands sounding like this. More info or contact can be found at the following location: www.facebook.com/whipstriker, label contact: morbidtalesrecords@hotmail.com