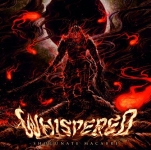 Do samurais still exist? Good question, isn’t it? Perhaps just in some of those people’s wildest dreams in Japan anyway – and whatnot, in a less populated northern country like Finland for instance? Who are you kidding here now? Finland’s four Metal digging samurais in WHISPERED love Japan – and obviously the Japanese history about these great warriors samurais, and they love also playing their ‘Samurai Metal’ (as some people have already cleverly nicknamed the sub-genre they might fall into) from the very bottom of their big samurai hearts and souls, so to speak. WHISPERED’s debut album ("Thousand Swords"), released in 2010, somehow managed to slip through my radar – without me even noticing it, but due to a increased volume of advertising for this very much talented act, their debut album finally managed to find a new home in my location also. "Shogunate Macabre" is quite a pompous, breathtaking journey to jump aboard really. Not only WHISPERED combine very successfully all types of sub-genres of Heavy Metal (Power Metal, Symphonic Metal, Battle Metal, Death Metal, Folk Metal, etc., you name it) into one bigger picture of their own type but they also amazingly skillfully spice their own thing up with some traditional Japanese instruments, to make completely a unique and original sounding musical formula. The result is something quite unbelievable really; definitely something that needs to be heard to be believed. Everything on "Shogunate Macabre" has been done with a great care. Every single detail on this record has been paid a lot of attention to. This is nothing like a rushed effort a bit but more like the kind of record that can only be done with enough vision, dedication, determination and musical talent. WHISPERED, quite often being heard to be compared to such acts CHILDREN OF BODOM, ENSIFERUM, WINTERSUN and even DIMMU BORGIR and NIGHTWISH (especially when the orchestrated parts take the main role within their music), have undoubtedly wanted to make a big sounding record, utilizing shamelessly some already existing elements and ingredients to build up this big soundscape on "Shogunate Macabre", and then adding this strong samurai theme onto the record by programming in some native Japanese instruments. And believe it or not, it really works for them immensely well in my sincere opinion. Having heard this very album in question probably like 10-12 times in a row, I honestly would not wonder at all if this new Finnish sensation put the whole Metal world on its knees within the following 2-3 years or so. "Shogunate Macabre" is absolutely a pretty sensational and wicked release. Just wondering how can so much talent fit into one record really? These Finnish samurais can be found at: www.whisperedband.com, label: www.redhouse.fi