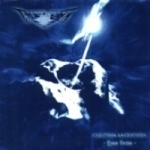 These guys are trying really hard to sound unique and even though I’m not exactly into their material myself, it definitely deserves a lot of respect! WHISPERING TEARS is a band from Paris, France that originally got together back in 1996, but nowadays consists of nine (!!) members. The actual band comprises of three guitars, as well as bass, drums and vocals but in 1998 they also added Étienne (on violine), Jessica (on additional vocals) and Thierry (piano) to the line-up. Musically they are influenced by a very diverse collection of bands (Death, Pan-Thy-Monium, Cradle of Filth, King Diamond, Malevolent Creation, My Dying Bride, Elend and even Mozart) and the result sounds a little bit like CRADLE OF FILTH meets MY DYING BRIDE at a classical concert. The whole atmosphere of the music is mainly very depressive and melancholic, but sheer aggression and classical influences are mixed in here and there in order to come up with an interesting mixture. The whole songwriting and the arrangements in particular are often kinda weird, but never to the extend that WHISPERING TEARS seem to drift apart too drastically from their actual musical path. They label themselves as “Dark emotional Death Metal”, with the intention to combine the aggression and brutality of Black Metal with the melancholy of Doom… Well, if that’s their goal, I think they pretty much achieved that already. The most interesting song on the album is obviously their own interpretation of an old Mozart composition (‘Die Versuchung der Tränen’), which Michael Harris of the American Power Metal act ARCH RIVAL also adopted on his first solo album several years ago (he entitled it ‘Mozart Lives’ though). So, all in all a very interesting release for those of you who are still on the lookout for something new. All further details you will find at the band’s website: whisperingtears.multimania.com/