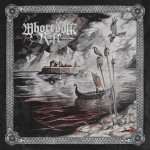 Here we have the second full length album of the Norwegian band WHOREDOM RIFE from Trondheim. They describe their sound as True Norwegian Black Metal and, yes, they’re telling the truth. This is basically a two-member band of icy Norwegian Black Metal with a modern and polished production. V.Einride handles all instruments, whereas K.R. is the vocalist. A total of seven songs for almost 50 minutes of pretty aggressive and well played second wave Black Metal. Some of the most important acts from Norway come to mind, especially SATYRICON and GORGOROTH. The fastest and more brutal parts have an approach similar to violent bands such as TSJUDER, URGEHAL and SETHERIAL from Sweden; a festival of dark and cold tremolo picking accelerations supported by violent single-foot European blastbeats à la Frost (the typical blender snare sound and the ping ride are present). Then we have some slowdowns with a precise and galloping double bass (surely triggered), as well as some catchy and headbanging parts like on the second track ‘Verdi Oeydest’. Here and there you’ll find some arpeggios and melodic parts, able to create a dark, evocative, freezing and epic atmosphere in the vein of MAYHEM from “De Mysteriis Dom Sathanas” and early EMPEROR. The guitars distortion is coherent and very spot-on for this genre, all enriched by some killer dissonant riffs. The last two songs have many slow parts, sometimes with an addicting quarter note drum beat sometimes with a monolithic double bass or a pseudo doomy tempo. It’s all alternated perfectly with the fast blastbeats. The agonizing, raspy and harsh screamings capture the essence of the genre: pain, panic, depression, misanthropy and anxiety. The lyrics deal with Norse and Pagan mythology, as can be seen by the cover artwork too. In conclusion, this is a solid album of Norwegian Black Metal from a young band that knows and follows the dictates of the genre to the letter, maybe too much. That is, in fact, the only problem with this release: the risk to sound like a redundant clone of the cult bands from the past. By the way, if you consider yourself an orthodox of the Norwegian style, you’ll certainly enjoy it. Approved! www.facebook.com/dommedagsryttere, www.terraturpossessions.com