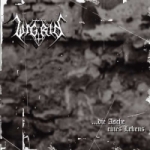 "Die Asche meines Lebens" is Wigrid’s second effort, but since I do not have their first album nor did I ever listen to it, I am not able to make any comparisons. This German band however draws a lot of influences from later BURZUM or other Black Metal, that nowadays would be labelled depressive. Four very long songs plus an ambient outro (also very similar to Vikernes’ ambient-efforts on his Metal-albums, but unfortunately not half as effective) is what we get on this album, and quite honestly they do grow with every spin one gives to "Asche meines Lebens". But I must admit that I am still not impressed. This is all in all a solid album, and those who have a favour for depressive Black Metal might risk an ear, but in times where we have a lot of choice in this genre, Wigrid certainly do not finish on the podium but as runners-up. www.no-colours-records.de