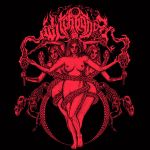 A one man band formed in 2018 and split-up in 2020… so not much of a history behind it. The music style is lo-fi Black / Death Metal with horrific low growling vocals and a barrage of noise and guitars that can also be related to War Metal bands. Early INCANTATION, touches of BLASPHEMY and also some early NAPALM DEATH can be recalled as influences here. The production values are just the ones needed for this kind of music, with a couple of riffs here and there, and drums all over the place. The first few songs are hard to differ one from the others, but the last ones, especially when the band goes for a more Doom / Death approach is where they do sound a lot more interesting. It is hard to say if this is a demo compilation, but I guess the title says it all. Obviously there is nothing new here, and the few more noisy songs tell me nothing, yet there are some good riffs and horrific passages here, that fans of the style will surely find something here. I have already been infected and exposed to some of their other works, and although limited in what they can create, they still deserve attention for those who carry darkness, doom, death as a dream. www.facebook.com/morbidchapelrecords

Julián “Keeper Of The Keys” Nuñez

Julián "Keeper Of The Keys" Nuñez