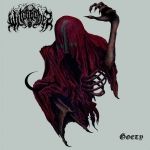 This is the third and last album of this one man band from the USA. They play an horrific and unholy form of Death Metal with a strong Doom sensation and a few Black Metal touches to make things worse… like a nightmare! The core sound is not that far from early INCANTATION, PARADISE LOST or even HELLHAMMER, yet they do have more than a few shots of adrenaline comparable to early POSSESSED or IMMOLATION. In the end the overall aura of this recording is in that realm where you can listen to a dying suspect with a heavy chain around his limbs trying desperately to survive the impending doom that is near. Yes, they have that suffocating aura, with very wicked and scattered melodies, but most likely grotesque riffs that can only mean certain death. An agonizing death I must add. The production values are also quite adequate, if maybe I would prefer a bit more of guitar volume, they all sound like a mass of sound ready to crush the skull of the unsuspected. The vocals are merely some low, deep whispers-like growls, more akin to an inhuman cavern dwelling monster than a human being, but alas, life is not something that abounds here, and it shows. At times I can also receive a bit of that aura of more brutish war metallic touches, but maybe it is all a thing of the senses being concealed by all the darkness around. Strangely enough, we have a cover of BURZUM as the last track, done pretty much in their style with a little change in guitar tone to make reverence to the original, yet done in their very own style. This makes me curious enough to check out the other material of the band, and I must tell you that it is in the exact style, vein and even sound. Lyric-wise the themes that the band touches are that of death, doom and darkness, which obviously fit the overall concept in a perfect way. The band seems to be no more, so this is a testimony of what an horrific nightmare turned to music can be. Fans of the style and of the bands mentioned, can do no wrong but checking them out. www.facebook.com/unofficialdeathmetal, www.facebook.com/morbidchapelrecords