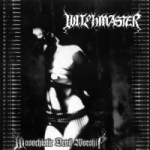 I don’t know what is going on with Pagan Records for the moment, because each of their CDs is painfully hard to get. They have to do something very fast otherwise such gems as this sophomore release from the Polish maniacs of WITCHMASMER could miss its audience, and that would be a shame. Well, for the reason stated above, I have been unable to get the first WITCHMASTER offering “Violence And Blasphemy” out already since 2000, so I can’t obviously compare the two albums (read Frank’s review of the first effort); suffice it to say that for now WITCHMASTER are a four piece, with former member Geryon (ex-PROFANUM) teaming forces with Inferno on drums (yes, THE Inferno of BEHEMOTH / DAMNATION fame), vocalist Bastis and bassist Shymon. “Masochistic Devil Worship” is a pure concentrate of raw Death / Black / Thrash in the old school vein. The not too polished production suits this kind of release well where only spontaneity counts. Short and to the point tracks doesn’t give place to refinement and experimentation, what you get here instead are 13 real songs (discounting three “ambient” and disturbing tracks) fired point blank at you like as much devastating bullets. Bastis delivers his vocals in a thrashy manner which perfectly fits with the not too planned music. All the tracks (including the covers of SODOM and SARCOFAGO) deal with the theme of sick and violent bondage that reminds me a lot what ARKHON INFAUSTUS are used to do, and that may repel some people (I don’t care too much myself, but some of you could find something of interest in this). The music appears extremely enjoyable and dare I say fresh and relaxing due to its lack of intellectualism. Even Inferno, known for his inhumane abilities on drums, abandons his mechanical playing here in favor of a lousier approach. Echoes of old SLAYER, KREATOR, SODOM (obviously…) and even TERRORIZER resound here and there, tying WITCHMASTER to the tradition of obscure and underground Metal. This release could become a cult one in the next years thanks to its uncompromising nature. Having witnessed the band in a live environment, I can say to you that we are dealing here with a bunch of dedicated musicians programmed only to destroy. Needless to say the covers mentioned above do fully justice to the originals, so in the end, “Masochistic Devil Worship” can appeal to all the lovers of the scene of old, before the time of the tyranny imposed on us by greedy labels marketing albums like washing powder. Enter this dungeon of blackened insanity and obey the Sadogoat!