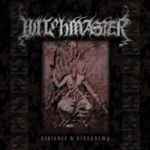 This release is already a bit dated and Poland’s WITCHMASTER have a new album out in the meantime ("Masochistic Devil Worship"), but due to the fact that we never gave "Violence & Blasphemy" a mention previously and Dark Realm Records just re-issued it in the US, it was definitely about time to do so after all. WITCHMASTER’s origin dates back to 1996 when former PROFANUM members Geryon (guitars / vocals) and Reyash (bass / vocals) decided to start up something new. With Vitold on drums their first rehearsal demo "Thrash Or Die" got recorded, followed by the first studio tape "No Peace At All" in 1997. Due to the fact that one of those demo songs ended up on a free Pagan Records compilation CD several labels (including Head Not Found and Merciless Records) got interested in WITCHMASTER. But instead of signing with one of them, the band decided to go for Pagan Records from their homecountry and recorded the debut full length "Violence & Blasphemy", which – apart from some newer creations – consists of almost the entire "No Peace At All" demo material (re-recorded) and a cover of BLASPHEMY’s ‘Ritual’. Musically WITCHMASTER is heavily influenced by 80s blackened Thrash Metal and if you listen real carefully, you should notice a handful of riffs from a quite famous German act of that period, but never to the extend that it comes across cheap or retro sounding. WITCHMASTER created a very cool own mixture out of it, adding several old school Death and Black Metal elements to their songwriting as well, so that "Violence And Blasphemy" easily stands the test of time. I’m really curious how the band has developed ever since, as "Masochistic Devil Worship" features a slightly changed line-up… Reyash and Vitold got replaced by Shymon on bass and Inferno (BEHEMOTH) on drums, while the vocals are now handled by Bastis. Further info: http://witchmaster.black.art.pl/