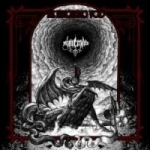 These days it’s more than difficult to differ between simple black coal on one side and the raw diamonds of our scene on the other one. But even if I nearly missed this MCD – the album arrived together with a handful of fully established bands – the decision where to locate this rising Swedish Black / Death Metal act is a more than easy one. WITHERSHIN has been founded in early 2006 and before they entered Necromorbus Studio to record their third official output they must have filled this place with "necrophobic" gas otherwise this release can’t be captured with simple words. Every fan of the early releases of the triumphirat of Satanic Black Metal DISSECTION, LORD BELIAL and the my personal gods NECROPHOBIC need to bow their head because "The Hungering Void" is a 15 minutes praise to the old gods. Especially the opener ‘Wherein I Exalt’ is a song which can compete in the formula one of this style with all the necessary trademarks – atmospheric guitars, 666% aggression and an evil eye for a killer chorus. But don’t expect a drop of quality for the remaining two tracks. The title track is a less than four minutes grenade which will burn every innocent souls with immediate effect. If WITHERSHIN are in the position to offer a full release on this quality level a new black star is born – I’m more than impressed. www.canonicalhours.com, www.withershin.se