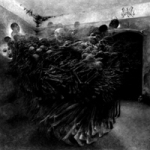 I’m really becoming an Insidious Poisoning fan due to the fact that their releases still own the old touch and true meaning of Black Metal. So again a very extreme release even if WOLOK are heading to a complete different direction. The band members are involved in several other French bands (DEVILISH ERA, LA DIVISION MENTAL, ZARACH’ BAAL’ THARAGH just to name a few) and in 2006 they recorded "Servum Pecus". WOLOK are playing hypnotic Black Metal and they’ve done a great job. The CD had been released via Eerie Art Records and Insidious Poisoning had been in charge for the LP version. The five songs plus intro / outro are traditional Black Metal with very interesting effects which gives the music this hypnotic touch. These feelings are further emphasised by some vocal effects (spoken passages) and the stoic repetition of several elements. But we are still talking about Black Metal so WOLOK are not following the Ambient / Black Metal direction of so many other bands. Especially the longer songs like ‘Mankind Euthanasia’ with a playtime of over 12 minutes gives the music enough space to fully develop. The chosen cover by Polish artist Zdzislaw Beksinski fits perfectly in the mood of "Servum Pecus" (especially a big bonus for the LP version) so overall a great release and worth to be added to every collection. www.insidious-poisoning.com