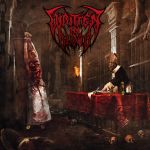 Bert “Beef” Hoving, former bass player of GOD DETHRONED, is back with a new band. Formed in 2019 this album is their first official release, the track ‘Ghouls Of The Forest’ was released as an appetizer in form of a digital single. When you hear the name GOD DETHRONED and Trollzorn Records now, you inevitably get a buzz like melodic Death Metal and Folk / Pagan Metal, which also applies to the eight tracks featured on the self-titled album. Whereby the latter is limited to the lyrics. The interesting question is what does band has to offer? Can WRITTEN IN BLOOD keep up with Beef’s former band or top performers like AMON AMARTH? The answer is not that easy, maybe let’s look at things from the end. Which in the present case represents a completely unnecessary break of incredible seven minutes at the end of the album, followed by a minute of some gargling / shrieking, thundershower and goat screams. This is neither exciting nor inventive. And that corresponds to my judgement regarding the whole album. It is not really bad, but it feels like it has been heard many times. Too many times for my ears. Mid-tempo paced melodic Death Metal with some interspersed samples to emphasize the Folk / Pagan aspect. What I do not want to deny is the serious approach, no hurriedly cobbled together tracks, the sound is also completely fine. Of course no one expects a debut to be a masterpiece that redefines the genre. But I am just missing that certain something, a song for example, that sticks in your head. Solid craftsmanship that does not stand out from the crowd of releases, but perhaps will find its admirers. More information about the band can be found at www.facebook.com/bloodwritten, for the label visit www.facebook.com/trollzorn