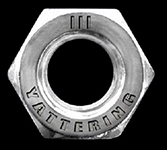 I received this promo pack directly from the band. Unfortunately every single track is cut after one or two minutes. Extremely annoying! So my first impulse was not to review this at all but as the material is really strong I’ll give you a rough overview of the music on here. First of all there is the “Genocide” album which is 100% in the vein of the first two YATTERING albums, maybe even a little more twisted and sick. Secondly, there is the album “III” which completely leaves the Metal behind. Sometimes it reminds me a little of ABORYM – but not really – or PRODIGY (‘Firestarter’) but very often it swings in a relaxed flow that nastily contrasts with the cold industrial sound (might be caused by the MP3 format, though). So hands off in case you’re exclusively into Death Metal! But as far as I can tell from these shortened versions of the songs, it’s worth a try – at least for open-minded people. Finally, there is a “live” video clip of ‘Panic In A Sea Of Blood’ (a “Genocide” – track) which can be downloaded from the band’s homepage. So let’s hope I get these two CDs unshortened for a more detailed review, huh? Until then: check out YATTERING’s realm on the internet: www.yattering.pl