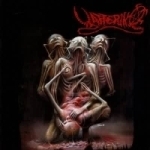 This first effort from YATTERING was discontinued for a long time until French label Season of Mist has got the good idea to give it a new chance, following their release of “Murder’s Concept”. This new edition is enhanced by improved artwork and some bonus tracks, that are two cover versions (of BRUTAL TRUTH and SLAYER, played with conviction and class!) and some promo material. For those of you who crave about “Murder’s Concept” already, go for this one as well as it shares a lot in common with the YATTERING’s sophomore album. This Polish act plays a twisted form of brutal Death Metal and always tries to come with fresh ideas and unexpected song structures. YATTERING could be seen as the European answer to CRYPTOPSY: the two bands follow the same path, both lyrically and music wise. YATTERING are fortunate enough to count among their ranks drummer extraordinaire Zabek, who stole the show more than often thanks to his amazing playing abilities. Zabek truly appears like a mutated jazz player exploring the realm of brutality, see the “Creative Chaos” video issued last year on Metal Minds Productions to judge by yourselves. On “Human’s Pain”, some backing vocal effects are not so appropriate, as they sound a little too close to what crap “alternative Metal bands” deliver today, but fortunately the growled parts dominate the mix. For a first effort, the general production is very satisfying and compliment very well what YATTERING is all about: extreme brutality but not devoid of finesse and technical prowess. If you don’t know them, don’t miss the chance to discover this highly talented band ! Creative chaos indeed!