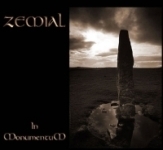 ZEMIAL is a sore spot of contention with me. I have wanted to like them since I first heard their band name mentioned in passing from friends in Germany. Thought the name was killer for a band, their logo just amazing and so memorable. Many months later I finally caught a flyer for the “Necrolatry” MLP (I missed out on the majority of the bands earlier efforts, even though like Gothic Records was within State) and so it was then after all this time when I finally got a hold of this record from Iron Pegasus that musically I was just disheartened. I had something else in mind wholly, and it wasn’t raw fucking Death Metal like I had heard initially either. So ended my craving for all things ZEMIAL (this too happened with Finns URN. What a killer Death Metal band name!). Almost 7 years later I still own nothing else of this band, until today. “In Monumentum” is a conceptual LP written and conceived in honour to pay tribute to the passing of Quorthon of BATHORY (good ol’ Q., may he sit under the table of the gods with enough meat scraps before him and his seat directly under a decent sized crack in that gods table, for the beer to flow down to him and quench his undying thirst!). Of that seven songs grace this recording, the first starting off curiously enough with the MEGADETH-ish (‘In My Darkest Hour’) opener ‘For A Fallen One’ and then quickly turning against that tide, the other six roll like the Absu in steady succession running the gambit of straight forward BATHORY inspired pieces. Pro recorded and mixed, this MLP has within its credits not only a pro production but as well, a full color 8 page booklet / tray insert and blackened silver disc. Contact: Postfach 1147, 53895 Bad Münstereifel, Germany or www.myspace.com/zemial