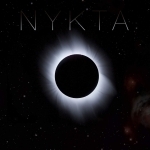 Many tried to put a label on ZEMIAL’s music, and many failed. Because the truth is ZEMIALmanaged to create their very own and unique style, by melting together early Black Metal, Thrash Metal, Epic and Heavy Metal, with elements of Avantgarde and Psychedelic Rock. So basically there is no other band around that sounds like ZEMIAL, and at the same time we can’t say that ZEMIAL sounds like any other band. Surely it’s not an accident, that their new album "Nykta" will have its premiere on October 31 – it brings even more mysticism, to this already dark and epic piece of art. Yes, art, because calling "Nykta" a regular Metal album wouldn’t be very fair. It’s really interesting how typical Metal parts, with double bass drumming, sizzling riffs and thrashing vocals, got mixed with almost progressive patterns and elements, or instrumental parts that sound like taken from some Italian horror movie from the ’70s (like in the 15 minutes long epos ‘Pharos’). It’s even more interesting, as from an album like that we would expect modern and massive production, and ZEMIAL goes into exactly the opposite direction: "Nykta" sounds raw, organic and very simple (in a good meaning of this word). HELLHAMMER and POSSESSED meets PINK FLOYD and GOBLIN? Yes, it could be nice comparision. But it won’t be, as ZEMIAL is still… ZEMIAL. The one and only. The very last song, or better – the very last track on the album, deserve a separate comment. ZEMIAL decided to record a tribute to the famous John Cage and his legendary ‘4:33’ composition. Did they do a good job? Hard to say, as it’s basically hard to say anything about the "original" version of ‘4:33’ as well, as every single listener will have his own opinion. So try to find some background info about John Cage and his "song", then listen to ZEMIAL and their ‘Out Of The Cage’, and judge yourself. Or better, interpretate yourself. Visit the band at www.facebook.com/pages/zemial-official/199551066758156 or visit the mighty Hells Headbangers at www.hellsheadbangers.com