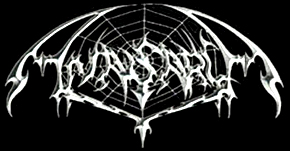 The distance between Emden, the hometown of ANASARCA, and the headquarter of VFTD is about an hour’s drive. But the German Federal Post Office needed six days for the delivery of their new four-track demo. But those six days are nothing compared to the eleven years the band was inactive. For all those who do not know – ANASARCA is a German Death Metal band, founded in 1995 and they released three albums between 1998 and 2004. The releases convinced the listener by being brutal and technical with a well-laboured songwriting. On "Moribund" they added some melodies, making this album one of the best German Death Metal releases in the new millennium. Another fact making this band something special were the lyrics of the last two outputs. They were written by death row inmates ("Moribund") or by terminally ill people ("Dying"). The four new tracks obviously deal with the differents aspects of survival. But now it is time to ask founding member Mike, responsible for guitars, bass, vocals, about the survival of ANASARCA.


As as a starter, how is the feedback to your four-track promo CD?
"Hm, as we have just a little feedback, people are surprised. Surprised about the fact, that ANASARCA are back and doing the same brutal shit than ever before. Most of the orders are from people that know us from back in the days and they are definitely satisfied with the new stuff that we recorded." 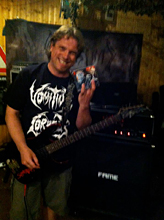 What were the reasons for shutting down the band after the release of your third album "Dying" in 2004?
"There was no special reason, it just happened. Herb, our former drummer, lives in Bremen, Joshi, who played the guitars then, went to the south of Germany in order to study and I became father, was busy with my studies… and so it became less time to rehearse or play live. Our label didn’t lay some pressure on us, so we just fell asleep. And so it was time now to awake from this deep slumber."

What have you been doing the last eleven years? Where there any band activities?
"Me personally not. I made some home recordings and wrote new songs for myself, never knowing if they will ever be released in a way. My new bandmembers had their own bands they played with. Dirk was drummer in DESPONDENCY and DISAVOWED, Steffen was playing with TEARS OF DECAY and Carsten is having another band called TOFORGIVE. At least Dirk and Steffen retired as well the last years."

Was there a certain incident or a specific moment when you decided to restart ANASARCA?

"Hm, I visited the Ear Terror Festival, that I founded in Emden in 2000 and which is done the last years by Michael Eden of EASTFRISIAN TERROR, more often the last years. And to see those bands, some of their members as old as me as well, made me fancy entering a stage again. I always said, that I never would go on stage with short hair, but today I know there is something simply missing in my life, that I did for many years with a lot of fun. And so I asked myself: why not – even with short hair? And so I searched for some guys to play with – and found them."

Did you have any expectations regarding the reactions on "Survival Mode" and if so which one?
"No, I hadn’t. Because I ever had the opinion, that we, in the first place, do this music thing for ourselves. We have to be satisfied. And if there are people who are satisfied as well and who want to listen to the stuff, so much the better of course! But as well as everyone would have said: fuck this new shit, just stay away like you’ve done it the 11 years before, we would have practiced and played the stuff – for ourselves, just for having fun."

Comparing "Moribund" and the four new songs, the lack of melodies is obvious. On "Moribund" lots of swift and razor-sharp melodic riffs drilling the listener’s brain. To me it seems you are concentrating more on the brutal side of Death Metal. Was that done on purpose or did it just come by chance? Are there any, and if so which, influences on your songwriting? 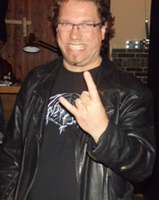 "Many people say so these days. I tried to go back to the roots, to create songs in the "Godmachine" style. Seems, that I failed. 😉 The titletrack ‘Survival Mode’ has a big variety I think, it has some POSSESSED -, HATE ETERNAL – and CATHEDRAL – riffing combined with this special ANASARCA atmosphere. My favourite bands still are old DEATH, old OBITUARY, the old Swedish bands like EDGE OF SANITY or old MORBID ANGEL. I am not so much into the newer bands and their stuff. I am just an old school bastard, living in his nostalgic world of the 90s. Today’s Death Metal is in my opinion way too technical and mostly just with the intention of being fast. There is a lack of emotions that you felt listening to "Leprosy" for example. Only a few bands are composing real songs that are recognizable today. That is what I tried to do, writing songs that can be assigned to different recordings, you know?"

The four songs on "Survival Mode" are worked out perfectly. How much time did you spend on writing and practising?
"We are not able to practice that often, as we all live in different areas and have our jobs. That was the point as we started again, we decided to have no real plan. We practice if we can, we play live if we can, we are releasing stuff if we can. So, the basics of the songs were written within several months and years – I started writing in 2011. As Dirk joined the band, we started to place some more details in the songs, so they changed a bit – but that was pretty cool. So I think we wrote some really brutal old school Death Metal songs in a modern livery."

Where did you record the material? Accordingly, a short line-up update, please!
"The drums have been recorded in our rehearsal room. The guitars and the bass were done by home-recording and the vocals plus the mix was done by our "home-mixmaster" Cord Hanken at the Art-Temple-Studio. So, the current line-up: Dirk (drums), Steffen (guitars), Carsten (guitars) and Mike (vocals / bass)"

You signed a three album deal with Mighty Music, but delivered just two albums. Were there any kind of problems like maybe a lawsuit?
"No, as we stopped to play, there was no need to record the third album yet. Mighty Music already got the new stuff, but I don’t know if they want a third album nowadays. At the moment we are thinking of self-releasing the album, although different labels already told us their interests of releasing a new ANASARCA album." 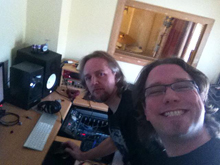 Are you still an autodidact / self-taught guitar player? Or did you have guitar lessons by now? Is there any kind of special training for your voice?
"Never had any lessons in bass or guitar playing. So I would never tell anyone that I am a "musician". I am able to play self-composed stuff nothing more or less. 😉 There is no special training for my voice and I must admit, that I have been husky a bit after recording the vocals. Not to growl such a long time maybe was not the best idea. 😉 But as I read in some older album reviews, many people wrote that I am anyway a weak and not so brutal growler – so why should I train? ;)"

What are your plans for the future? Rumours say you have already worked out more than a dozen songs.
"No rumours. I wrote about 16 songs that would be able to being prepared for an album. Finally 10 songs will be on it I think, so let’s see which ones. We are now preparing some gigs at the end of the year, playing Nürnberg and the Ear Terror Festival in Emden e.g. But we’ll try to do some more gigs until the year’s ends. Besides that we are practicing new songs in order to record an album as soon as possible."

The band was founded 1995 and during the last 20 years the World Wide Web changed all and everything in a drastic way. Since it is a waste of time to mourn about the past, what are in the eyes of a Death Metal band the advantages and disadvantages of the times we live in?
"So, as I am an owner of a Social Media agency, I live in this world. For a Death Metal band it is much easier to get in touch with fans, magazines or labels. On the other hand those are bombed by bands from all over the world. But you can easily upload your songs to e.g. Soundcloud and send the links to labels or mags, so you don’t have to send physical stuff. It is cheaper than times before as you had to print CDs / tapes and to send them away with an additional postage. But I have to say that the feeling was better in the old times: having selfmade fanzines and a loyal scene… That was pretty cool. I sense that nowadays gigs are not visited very well, which is very bad."

Concentrating on music, which album(s) was the most positive and which the most negative surprise for you during the last months?
"Hm, as I said, I am mostly listening to old stuff like tapes, LPs… but as a big fan of the older DEATH, I think GRUESOME is a must to have. I heard the new PARADISE LOST stuff lately, was also pretty cool! I also like the Swedish old school line ENTRAILS or DEMONICAL. FLESHGOD APOCALYPSE is great as well. But as I said, most of the bands today just try to be as technical and fast as hell, but forget to write good songs that don’t sound equal."

Many thanks, for the interview, all the best for the future and, as usual, the last words belong to you!
"Thanx for the interview, Nice to see, that ANASARCA seems not to be the forgotten ones. Join us on Facebook in order to get in touch directly and stay brutal."