Sadly, the resurrection of the legendary ANGELCORPSE was not to last. Fortunately for fans of unhinged blasting Death Metal, ex – ANGELCORPSE axeman Gene Palubicki has clearly not been idle. He has unveiled not one, but three, intense evil Death Metal bands: BLASPHEMIC CRUELTY, PERDITION TEMPLE and APOCALYPSE COMMAND. I recently had to opportunity to pick Gene’s fevered brain on his past and future work…

Let me first get this off my chest. From what I’ve read, you’re a big MORBID ANGEL fan. My friends (as the media) are divided as to whether "Illud Divinum Insanus" is a masterpiece or a tragic blend of decent Death Metal and latex homoerotica. Do you see their new record as a bold experiment, or a colossal blunder? If the blonde dude left his slot as guitar player in MORBID ANGEL and Trey asked you to join the band, would you consider?

"People can take this however they want… When I heard the full album of that latest MORBID ANGEL, it sounded to me to be exactly the album that would have followed the "Domination" album… The groundwork for that latest one was all spelled out on that older record… There was just as much "rock" on "Domination" as there is on the "Illud…" album and both have a handful of "Death Metal" tracks… Is this all a pro or con? Does it matter? I’ve got no emotional attachment… And I’m sure for most folks the same week that album came out, there were 5-10 other ones that came out that they could gush over, so I’m certain no one was bothered for long… Oh, and no I would not "try out" for MORBID ANGEL…."

Ok, now back to topic. I’ve always been curious as to how ANGELCORPSE was formed. Did you approach Pete after an ORDER FROM CHAOS show, or was it a "flyer-seeking-other-musicians" type thing?
"Pete and I were tape trading and whatnot and eventually when his old band folded we decided to form a band (ANGELCORPSE)."

As the real ‘heads know already, the "Iron, Blood And Blasphemy" release has some sick cover songs (let me say the re-recording of ‘When Abyss Winds Return’ with Tony crushes everything)! Is it true that you did the ‘Araya scream’ on ‘Kill Again’? What bands would you consider covering for your new projects?
"There are always some things that I hear that I’d like to do an interpretation of… If I do some with my new bands / projects there may be some surprises and in some cases choices might be very obvious… who knows, I just delegate that sort of thing to "b-side" thinking anyways… And yes, on the cover of ‘Kill Again’ it is me doing the "Araya" scream…"

When ANGELCORPSE played this region with KRISIUN about ten years ago, I recall the vocalist of KRISIUN having to cover for Pete, who’s girlfriend was allegedly stabbed(?). What happened during the tour? Did the final split of ANGELCORPSE result in lasting venom between you and Pete? Are you still buds? Do you like his KERASPHORUS project?
"Yeah, some things happened on a tour we did in early 2000 that brought a lot of under the surface issues to a head… So it stopped… All the details are unimportant to people that this stuff means nothing to… And all this is not unique either… And more to the point, we reformed and then new sorts of issues prompted the ending of the band for the 2nd and final time… Are Pete and I bitter? No. Do we still speak? Yes. Quite often actually… And yes, I did like KERASPHORUS, and I thought it rather unfortunate that the band was so short lived…"

Was the move from Kansas to Florida a result of seeking a better Death Metal scene? Do you hang out with Florida bands?
"At the time (1998) the drummer, Tony, did not want to relocate to Kansas City, Missouri. So to make things easier, Pete and I moved to Tampa, where Tony was at… We were bored with Kansas City, so it didn’t take too much arm twisting to get us to go… Do I hang out with other bands? Not really… I see people at shows / whatnot but that is about it…"

Being that the support for extreme Metal in the US is, ah, a bit anemic, would you ever consider relocating to Europe (as both DESTROYER 666 and GOSPEL OF THE HORNS have)?
"Never had any notion about moving to Europe…" 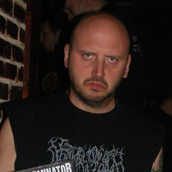 On the APOCALYPSE COMMAND debut, I understand that drums were tracked in New Zealand by Cam of DIOCLETIAN – with the remaining instruments done by yourself in America. How did you hook up with Cam? Did you send your songs to him recorded over a drum machine? Was the process smoother than the ‘drum correspondence’ with Longstreth on the final ANGELCORPSE record?
"The situation with Cam came about through Darragh from the label Invictus Productions… He must have mentioned the idea to Cam and he was into it, so it happened… I sent pretty raw versions of all the songs to him and he worked out all his parts and recorded them in New Zealand and then sent to me and I added all my stuff at my home recording setup and off it went… Sure, there are pitfalls at not being able to bang out the tracks in a rehearsal room and whatnot but it all came out alright in my feeling… And yes, the process for this one, as well as the similar situation for the recording process of the PERDITION TEMPLE album with Terry Eleftheriou, also went well… Both actually much smoother than what went on with the final ANGELCORPSE album, which much of that was more problems with the studio situation than John himself…"

Will you record future APOCALYPSE COMMAND material with Cam, or do you picture Terry (PERDITION TEMPLE) or Gina (BLASPHEMIC CRUELTY) filling in? 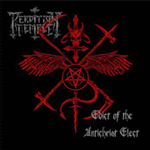 "Cam is rather tied up now with several bands in New Zealand, which would limit likely future collaboration… Sooooo, since it is not possible for Terry Eleftheriou to participate in PERDITION TEMPLE activities, he will likely be involved in future APOCALYPSE COMMAND product… Out of any of my activities, this one is surely a project work and will have no sort of fixed schedule, so it can be easier commitment for us to do that…"

How often do you rehearse with each of your bands? Do you guys get liquored-up, or is it strictly sober and professional?
"For both of my active bands, PERDITION TEMPLE and BLASPHEMIC CRUELTY practice is usually 2 nights a week for each, basically alternating nights for both bands with a few nights off during the week to be away from it… I will say the consistency of all the practice is advancing my playing / performance abilities greatly… I’m discovering ways of pulling off stuff now at around 40 years old that I scratch my head and wonder why I couldn’t figure out when I was 17!"

What project is closest to finalizing a new full length?
"Both PERDITION TEMPLE and BLASPHEMIC CRUELTY are in the development stages for new releases, and now under the new label, Hells Headbangers, things are working now on a much more "grass roots-ish" level that is surely more appropriate for where I’m looking to go with all of this…"

Do you foresee a point where the strain of having 3 bands will become too much of a hassle and continue with just one (my bros and I certainly hope not!!)?
"No. I find it rather invigorating to have all the activity… it’s what I’ve been doing half my life now, so it all makes sense…"

A friend of mine recalled seeing in an interview that you scorned bands playing "Pig Metal". What bands fall under this category? Should Death Metal follow strict parameters in your view?

"I guess they must be referring to the "burp" type modernistic (actually rather old now) Death Metal "Grind" whatnot… I’d say the sort of sound / songs I never liked were the riffless mathematical tech stuff that you forgot each tune a moment after hearing them and the vocal styling with the mic-cupping speaker crackling sound… Again no definition, no nuance… Anyways my opinion is not unique concerning this stuff, so this probably isn’t much of a revelation for anyone familiar with me at all…"

When are you most inspired to write new music, when your mood is relaxed and content, or after fighting with bill collectors and fucktards in traffic?
"Sometimes stuff will just flow and a song will form in a day… Some things only seem to finally come together after years time… Like some stuff on the previous PERDITION TEMPLE album dates back almost a decade at this point and the album only came out about 2 years ago! There is not some pretentious "ritual" to all of this… For me, it either just rolls out or it is a mental war of attrition until I get something the way I want…"

Right around the turn of the millennium, there was a ton of killer blasting Satanic Death Metal bands; KRISIUN (who personally bore me to death now), OPHIOLATRY, HACAVITZ, ABHORRENCE, and others. With the exception of your nuclear triad, this style seems to be diminished. Do you have any bands to recommend today (blasters or otherwise)?
"All sorts of stuff I guess… For whatever reasons, some things grab me and I listen to them more often than others… I’m no hipster and some of the bands I like may not even be the "cream of the crop" by popular standards, but those things are totally irrelevant to me… Death / Black stuff: NECROVATION, LUCIFYRE, MAVETH, NYOGTHAEBLISZ… Other stuff: DAVIE ALLAN & THE ARROWS, UNCLE ACID & THE DEADBEATS, ORCHID. For the most part, I still listen to all the old albums that got me into this situation in the first place…These just might be some new additions to my collection that get played enough for me to remember them at this moment…"

If you could form the ultimate band with members alive or dead, who would they be?
"Been there, done that, doing it over again and I’ve got the right folks that I need this side of the grave… I don’t need to do some necromancy to get what I want for my music… I save the necromancy for when I’m looking to get some ‘touch’…."

Ok that about sums it up… Thanks for your time, brother! Any final words?
"Thanks for the support and it was good to get back in touch after all this time!"