When CENTINEX were Playing in Ghent at the Frontline in Belgium, I tried to do a ‘live’ interview with them, but somehow it didn’t work out at that time. So I contacted Martin Schulman by e-mail and still got some answers to my questions this way. Unfortunately the answers are a bit short, but it’s better than nothing of course. Maybe I’m more lucky next time, anyway, here’s what Martin had to say…


How did the Repulsive Revenge tour go for you? Satisfied with the feedback you got from the audience?
"Yeah, it went OK. Some of the shows were really killer, like for example Zaragoza in Spain and Brno in the Czech Republic, Toulouse in France was very cool as well."

I read that Kennet and Jonas weren’t able to join the European tour. Why?
"Nope, they couldn’t join because of various problems with work commitments etc. So we had to come up with this temporarily line-up solution. Instead Johan handled the drums and Robban Kanto from the Swedish blacksters AZURE came along as a session vocalist. Kenneth was responsible for all the guitar duties."

Can you tell a bit more about the band AZURE because I don’t know them?
"AZURE is a one man-band by Robban, it’s some kind of "fantasy-Black Metal". He has released one mini-CD and one full length album so far, but I think the band is pretty dead now. Robban is also the main man behind the second biggest Swedish written Metal magazine, namely SERENITY MAG." 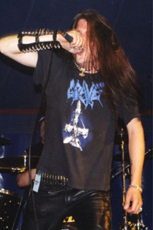 CENTINEX was formed around September 1990. Were you heavily involved in the underground scene at that time?
"Yeah, I was quite involved in the scene. There was no special reason why we formed the band, basically we just needed something to do in between the drinking sessions. The name CENTINEX doesn’t mean anything, it’s a made up word."

In July 1991, you entered the Sunlight Studio and recorded the "End Of Life" demo tape which then lead to a deal with Underground Records. What are your memories about those days?
"We sold nearly 500 copies of the demo and I think we could have sold even more but we stopped selling it when we had recorded the album. I think I sent the tape to quite many label… I’m not really sure anymore, it’s almost 10 years ago and I have consumed quite many liters of vodka since then…"

In July 1992, the "Subconscious Lobotomy" CD was recorded at Sunlight Studios. You supported the album by playing some gigs in Sweden and Finland. Only 1000 copies were made of that album and it sold out already a long time ago. Are there still many people who ask for it?
"I have received mails from people who are willing to pay up to 50 US $ for a copy!! It should have been re-released through Repulse about a year ago but Underground Records, the label who originally released it, came with all kinds of demands so the whole release was cancelled. Too bad because the re-mix we did of it turned out really killer!"

Later on, your second vocalist left the band early that year and from then on, CENTINEX continued with only one frontman. A three track promo tape, "Under The Blackened Sky", was recorded in March which Wild Rags Records released as a cassette EP. Did you also have many problems with Wild Rags like so many others?
"The main problem was the delay with the release. It was delayed for half a year or something…" 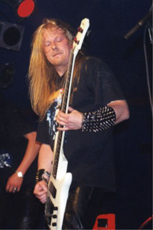 In June 1994, CENTINEX entered Unisound Studios to record the "Transcend The Dark Chaos" cassette EP. You released the tape yourselves but it was also licensed to the Polish Iabel Sphinx Records.
"Yeah, we recorded it during 2 days so it went pretty fast. We had a good time, but there was not that much alcohol involved in that recording though…"

In 1995, your drummer left CENTINEX and the hand continued with a drum machine. Three new tracks were recorded at Abyss Studios. Those tracks, together with the "Transcend The Dark Chaos" tracks + one track from the "Under The Blackened Sky" tape, became the "Malleus Maleficarum" CD which got released in April 1996 through Wild Rags. Did you put out that compilation just to show the people out there that the band was still alive or what was the main reason?
"Maybe it was something like that … but I think it was Wild Rags who came with the idea of this ‘compilation’. We were stupid and accepted it!"

In March 1997, the "Reflections" CD was released through Die Hard Music. The album got recorded at the Abyss studio, and for me personally it’s still my fave output of yours. How do you look back at that album?
"The album "Reflections" turned out quite good actually. The sound is killer on that but everything was ruined in the mastering process, it was totally fucked up at some mastering plant in Denmark! Listen to it and you will hear!"

Later on, a deal with Spanish Repulse Records was signed and the band entered Sunlight Studios to record the "Reborn Through Flames" album which came out in June. That album also featured a KREATOR cover, ‘Under The Guillotine’. Did you ever receive a reaction from KREATOR themselves?
"No, we never heard anything from Mille & Co. Luckily…" 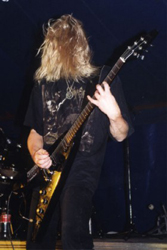 In 1999, the "Bloodhunt" mini-CD was recorded at Black Lounge Studios which got released in June through Repulse. In July, you also found a new drummer and you did two European tours during that year and played gigs in Germany, Holland, Belgium, France, Czech Republic and Slovakia. Would you say that 1999 was one of the most successful years in the history of CENTINEX?
"The year ’99 was a good year for us, that’s true. But so has this year been as well. Actually, since we got rid of our old pussy vocalist and our wimpy guitarist, every year has been a good year!"

Last year, you released the "Apocalyptic Armageddon" 7" and the "Hellbrigade" album which got once again recorded at the Black Lounge Studios. Can you actually tell a bit more about that studio because I never heard of it before.
"Black Lounge Studios is quite a new place, it started up for real about a year ago. The owner & engineer of the studio is Jonas, our guitarist. The studio has equal equipment as the "old" Abyss studio (now Abyss B), so good quality is guaranteed! It goes very smoothly to record in your "own" studio. You can basically use as much time as you want, everything is very relaxed, it becomes cheaper for the label etc. CENTINEX, CARNAL FORGE, DELLAMORTE and JULIE LAUGHS NO MORE are some of the "known" bands that have recorded there so far… But there are more on the way."

Throughout your career, you released many limited 7" singles and also your albums are most of the time available on vinyl. Do you prefer vinyl to CD?
"Vinyls are much cooler than compact discs. CD’s are too sterile and clinical." 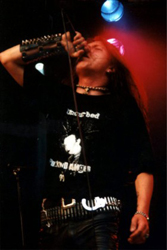 How do you look back nowadays on the time when you recorded and played gigs with the drumcomputer instead of a real drummer?
"There is no use in looking back… it was CENTINEX anno ’95 – ’99, now we have moved further."

Are you satisfied with the way Repulse Records is promoting CENTINEX?
"Repulse have done a good job with "Hellbrigade", almost a bit better than what we expected!"

What do you think of the current underground scene especially what Death Metal is concerned?
"It seems that Death Metal is coming back a bit which is good. Maybe the kids have become tired of all third rate Black Metal-bands who have polluted the scene during the last years." 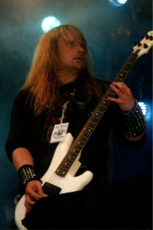 How’s your relationship in general with other Swedish bands? Are you friends with many others?
"We know some other bands, yes. But it’s nothing to brag about…"

When you overview your career so far, are you then satisfied?
"I try to forget the hard times. Every time you have signed a new better deal, made a better tour, released a better album etc., it has been a highlight. You try to achieve higher goals all the time…"

What are your current future plans?
"We have started to work on new material for the next album. Maybe we’ll record it in late spring / early summer or something? Well see… Besides that, we will do some shows here in Sweden during the winter and hopefully we can also play some festivals down in Europe the coming summer."

Anything you would still like to add to this Interview?
"Thanx a lot for this interview & your support! Keep it dirty and raw! Contact e-mail: centinex@hotmail.com