Old school Finnish Death Metal anyone? Finland has somehow always been overwhelmed by its neighbour Sweden when it comes to Death Metal. Nevertheless, Finland also had some great bands back in the days, just think of DEMIGOD, XYSMA, DISGRACE, ABHORRENCE, LUBRICANT, AS SERENITY FADES and… CONVULSE. Their debut “World Without God” (1991) is still a great, brutal and very underrated album which hasn’t lost anything of its charm. I was quite surprised when I recently found out that CONVULSE is active again and are even about to release some new material for the first time in 20 years. We had to find out more and so we contacted frontman Rami Jämsä to get to know a bit more about the past and the present.


CONVULSE was originally formed in 1988 in Nokia (Finland). What would you say were your motivations back then to start a band? Was it easy to find all the members and complete the band? And was it easy to come up with own material?
“I remember having my first band when I was 12 years old and played guitar just a couple of months. The main reason to play guitar was the IRON MAIDEN album “Powerslave”. It was the first time I heard Heavy Metal in my life and I was incredibly impressed by its power. Afterwards, I needed more brutal stuff like Speed, Thrash, Death Metal and so on. It was actually quite simple to form a band. You just hung around with your friends and realized that your friends also listened to Death Metal. Some of them started to play drums, some others picked up guitars and so on. Pretty soon I noticed that I had a pretty good ear and that I could copy the notes of my idols. I also started to compose own songs pretty soon.” 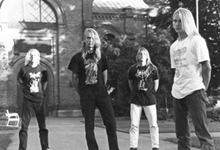 What are your memories regarding the recordings of your demo “Resuscitation Of Evilness” (1990)? Did you feel like you were doing something special?
“We were all just 17 years old when we recorded “Resuscitation Of Evilness”. We had practiced a couple of years and we played quite well together. I can’t remember if I thought that we were doing something special, we were all just very excited about our music and Death Metal in general. And after 22 years, I have pretty much the same feeling again when I compose new songs and rehearse them together with the band. The “Resuscitation Of Evilness” demo had a very good response, we also sold about 1000 copies of that demo if I remember correctly. It spread our name and it definitely opened some doors afterwards.”

Your debut album – “World Without God” (1991) – was released through Thrash Records. Did you hook up with them through SENTENCED? How do you look back at your debut nowadays? The album got re-issued a few years ago so I guess it’s still your most popular album?
“You guessed right. We were in contact with SENTENCED back in those days and often played together. They recommended Thrash Records. “World Without God“ is still a killer album if you ask me. We had some problems regarding the financing of the studio costs and so we had to do the album in only six days. But I still think we managed to do things pretty well considering the very limited studio time we had. The album was released late 1991. Later on, we had quite some difficulties with Thrash Records as we never got any royalties or any report of the sales of the album. They also promised to release the album on CD which they never did. The first time the album was available on CD was when Relapse Records re-released it in 2010.” 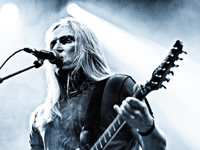 Did you promote your debut a lot through live-shows? Because – to be totally honest – I hardly know anything about your past when it comes to the playing of shows or tours.
“We played only in Finland, we also didn’t perform that much. We never played in foreign countries. Those gigs were mostly in youth centres and were arranged by other Metal fans. So everything was pretty unprofessional back in those days. The best promotion was the writing of letters, trading tapes, fanzines, flyers and the album itself. I think the main reason why we didn’t play many shows was because we thought they were not such an important way to spread our name.”

Your second album – “Reflections” – was released in 1994 through the label Relapse. The music on “Reflections” was far less extreme than on your debut. The music had much more groove and sometimes even almost a kind of Rock’n’Roll touch to it, if you take a track like ‘Memories’ for example. What was the main reason for this? Were you satisfied with the outcome and the result? How do you look back at it nowadays?
“We were evolving gradually out of the Death Metal scene. We also started to listen to bands like PINK FLOYD, BLACK SABBATH, SOUNDGARDEN, THE DOORS and even RED HOT CHILI PEPPERS. So, we sort of put those influences in our Death Metal approach. The new songs worked pretty well in rehearsals but the outcome on the “Reflections” album, well… Let’s just say that the album didn’t catch the feeling we got during the rehearsals, that’s for sure. We signed with Relapse and it was their idea to go to the Sunlight Studio in Sweden for that album. We had one week of recording sessions and then it was time to travel back to Finland. We had no chance to be involved in the mixing sessions because three of us had to fulfill their military service. I remember being very disappointed when I heard the finished album for the first time. Somehow the album sounds just too clean and sterile. “Reflections” was released in 1994 but the album was recorded at the end of 1992. By that time, CONVULSE was practically already at the end. There were the usual musical differences, we also didn’t want to practice hard enough anymore, there were some bandmember changes… it just wasn’t fun anymore. Everything started to become so difficult that I got pretty tired to run CONVULSE and decided to move on.” 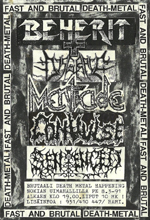 CONVULSE re-united in 2012. Can you first of all tell us what all the members have been doing in these years of absence? And what was the main motivation to get CONVULSE going again after almost 20 years of silence?
“At first I tried to get all the original members back together for one show but that turned out to be quite impossible. Our original drummer lives in Thailand nowadays and the other guitarist was not that interested. So I decided to ask my old mate Rolle to play drums (we have played together since 1998) and a younger dude named Kristian to play guitar. At first, the idea was to play only one show in our hometown Nokia and to have some fun. But soon after, I noticed how good we sounded and how motivated we were. I also had a couple of new riffs ready. So we decided to play more shows throughout Finland and soon after we had some quite good old school tracks ready.”

When you started to rehearse for the first reunion-shows, did you immediately have the feeling that the ‘old spirit’ was back again? How was the reaction from the audience to your first shows in almost 20 years?
“It was pretty soon crystal clear that we would go on. The response from the audience to our comeback shows has been very good. They were impressed how tight we sounded after all these years. That sometimes makes me laugh because, all together, we have over 100 years of experience of playing in various bands. When you start to practice with a new band, you pretty soon notice if it is worth it or not. This time it is.”

Was it clear from the beginning that you also wanted to come up with new material?
“New songs come along with a good feeling in a band. It would be such a waste if I would not write new material with this new line-up of CONVULSE. My personal goal right now is to write the album which we should have done after “World Without God”. As you probably realize by now, the “Reflections” album is not exactly one of my favourite albums. I also want to be busy with music just like we did back in the old days. Rehearse a lot with the band and later on record the songs together in an analog studio without any help of modern technology.”

We can expect a new EP called “Inner Evil” in January 2013. When listening to the title-track (you can listen to it here), it really seems like time stood still. The material sounds very brutal and reminds me very much of your debut. Also the artwork couldn’t get more old school.
“We have practiced a lot together and I think it was the right time to record a new EP. We approached the whole thing just like in the old days. We recorded the drums and the bass together live, just as the guitars. I think it is better to play together as a band and concentrate on the pure energy and the feeling. We use whole takes from the songs and we ‘correct’ them afterwards as little as possible. The EP has been recorded in a full 24-track analog studio and I have to thank the recording engineer Juuso Nordlund a lot. He really is a master when it comes to old analog techniques. I also contacted the old school Death Metal artist Luxi Lahtinen. He had some old drawings and we chose one of them for the cover of the “Inner Evil” EP. Luxi also started to draw again so I also asked him to draw the cover of the new full length CONVULSE album. We are working on our fourth song at the moment. I think we will be ready to go back into the studio at the end of the summer of 2013. So, if everything goes as planned, we will have a new CONVULSE album at the end of 2013.”

What are your main goals with this reunion? Put out a new album and play some nice shows in Finland or is there more to it?
“I think you pretty much hit the nail right there. You never know what happens but I would already be more than satisfied when we can play some nice shows and record new albums in the future. The audience out there will decide if we’re worth it or not.”

Any closing comments or anything we forgot?
“Thanks for the interview, I’m very happy with your interest in CONVULSE! Buy our EP from Svart Records once it’s out, the release-date is the 25th of January 2013. Thanks!”