There are some bands that are able to keep the old school vibe and sound alive in every kind of musical style. Most times the result is just a copy of the original, but sometimes (a few ones) we face astonishing bands and albums that simply were born and were recorded too late. CULTUS PROFANO from Los Angeles is a perfect example of Scandinavian Black Metal from the ’90s; a jump back to the roots of this evil genre. Thanks to Advorsus (drums and vocals) for this very interesting talk. 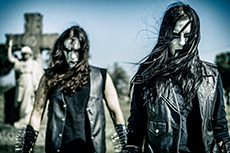 CULTUS PROFANO is a pretty young band, since it was born just few years ago. You released a demo and a full length album so far; all in a couple of years. Can you explain us the genesis of the band and can you take stock of these first years of activity?
"Yes, CULTUS PROFANO was formed by Strzyga and myself in 2016 and the last few years have been very busy for us. Our objective has always been to create dark Black Metal that channels our aggression and hatred. We are very proud of everything we have achieved so far. Of course, it has taken a lot of hard work, dedication, and sacrifice, but everything has been worth it and we are looking forward to the future."

CULTUS PROFANO has already made a name for itself in the underground. Each of your releases has got some killer reviews and a great response from the Black Metal scene. Which are your plans for 2019?
"We appreciate the amount of support we have received from the underground scene. It’s good to know that there are others that share our dark vision for evil Black Metal. We have a lot going on this year, we are almost done writing the second full-length, a music video is in talks, and we are actually getting ready to head on the road for a tour with HORNA next week." 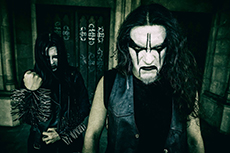 Do you rehearse on a regular basis? How do you compose new songs? How long does it actually take to get a perfect CULTUS PROFANO song? Can you explain us your process of songwriting?
"Rehearsals are a big part of CULTUS PROFANO. We try to rehearse at least four times a week. Our composition process is unconventional compared to other bands. Since we both play guitar and drums, we share the composing duties equally. For each song we alternate between writing riffs and drum patterns. This method can elongate the time it takes to finish composing a song, but at the end we are both fully satisfied with the final product. Sometimes it can take us just one rehearsal to complete an entire song or other times it can take months to mold and really perfect each song into it’s final version."

Can you tell us something more about the lyrical and visual concept behind your music?
"Our lyrics can range from occultism, demonology, possessions, rituals and anything that we feel we connect with. The visual aspect behind any band is an extension of the music. For us, we want to emit a dark energy on stage. Corpse paint, spikes, fog, symbols, etc are all tools that help us get our message across. It’s a vessel for us to express our music and anti-religious views through a visual perspective."

You’ll be playing a couple of gig with HORNA next, right? Tell us something more about your live activity. Will you be playing at any important fest or will you come to Europe to promote your last album? 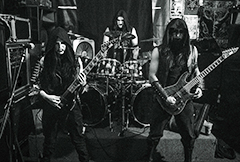 "Yes, we will be joining HORNA for six dates here in the US. The majority of these dates are on the West Coast and one is in Chicago, Illinois. We are currently in contact with some European promoters / festivals, so we will see if anything can be confirmed for later this year. We definitely plan to perform live more often."

CULTUS PROFANO doesn’t sound like a typical Black Metal band from USA, on the contrary “Sacramentum Obscurus” is a prime example of the cold Norwegian sound from the early ‘90s. Which are your main influences?
"Our goal was never to have any specific sound, whether it be Scandinavian or more like USBM. Our only goal was to write evil Black Metal. We write, and have always written, music for ourselves. Of course, we are fans of old IMMORTAL, EMPEROR, DARKTHRONE, SATYRICON, GORGOROTH and MAYHEM, but we never intentionally wrote our music so that we can sound like the Norwegian scene from the 90s. We are also heavily influenced by Black Metal bands outside of Norway like BATHORY, SUPPLICIUM, NOCTERNITY, ARMAGEDDA, TENEBRAE IN PERPETUUM, STUTTHOF, KROLOK and WATAIN." 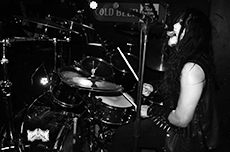 Your album is able to keep alive the old school Scandinavian sound from the early 90s. Please, tell us something more about your recording, mixing and mastering sessions. Do you use any particular equipment to get this sound?
"When we entered the studio we wanted a recording where everything would be audible, but still have that dark atmosphere. We knew that we did not want an over-produced album with a ton of editing. We went to a studio where I recorded drums and vocals and Strzyga recorded bass. The guitars and Strzyga’s vocals were all recorded by us on an old Tascam that has killer reverb. Luckily, we found an engineer who worked with us to mix the album in our vision."

You’re from California, a state mostly known for its Hardcore and Thrash Metal scenes, as well as some Death Metal legends such as AUTOPSY and SADISTIC INTENT, not exactly a source of freezing Black Metal bands. How is the underground scene there? Can you recommend us some new and interesting bands from California?
"Yes, California has had a good number of bands come out. I honestly do not really go out to many shows nowadays so I am not too familiar with the new upcoming bands. However, I do know for sure that the Metal scene in LA is very strong. Touring bands sometimes even plan two dates here because the first will sell out so quickly." 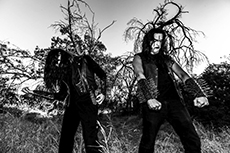 What do you think about the Black Twilight Circle from Southern California and the Mexican band XIBALBA? Are you into this kind of sound?
"I am not an expert on that group, but what I have heard from the bands involved is good. Most of the bands really embrace darkness which is something that we strongly support."

How did you get the deal with Debemur Morti Productions? Is it only for one album or does it include the option of releasing other titles?
"We have always been fans of Dembemur Morti Productions. They have released some very dark music and we appreciate that. Some of our favorite records have been released through Debemur, by bands like ARCHGOAT, TENEBRAE IN PERPETUUM and NOCTERNITY. We got in contact with them in 2017 and were proud to be added to the roster. We will be releasing our next album with them sometime later this year or early 2020."

I’m really into your drumming style on “Sacramentum Obscurus”: solid, fast and dynamic; pretty reminiscent of a Black Metal maestro like Frost. How old were you when you started playing? Are you self-taught or have you studied music? How have your drumming techniques changed during your musical career? Who are some of your main drumming influences today and back when you first started?
"Thank you. Frost has definitely been a huge influence in my playing for years. I did take a few lessons when I was kid. Nothing too serious. I was basically just taught how to hold the sticks and play some basic beats. After that, I taught myself by listening to SLAYER, MERCYFUL FATE, METALLICA, etc. My influences are still pretty much the same with some additions as time has passed. Dave Lombardo, Pete Sandoval, Frost, Hellhammer, Nick Barker, Inferno all helped shape my style of drumming. I tried to take something from of each one and make my own style."

You’re also involved with the Death Metal band SADISTIC INTENT. You’ve been playing drums in this legendary act since 2011, right? Are you working on new material?
"Yes, this year marks my eighth year with them, and it has been eight long great years. Yes! We are currently working on material for the legendary unreleased debut full-length. It’s sounding aggressive and true to the old school dark SADISTIC Death Metal sound. It will be killer when it’s finally out!"

Ok man, thank you very much for this very interesting talk. Last but not least, where can our readers buy your albums and merchandise? Which titles are currently available?
"Our full-length, "Sacramentum Obscurus", can be purchased in LP and CD format in Europe via the Debemur Morti website or in the States by contacting us at cultus.profano@gmail.com or visiting Hell’s Headbanger’s website. We also have shirts, patches, and pins available by contacting us. Thank you, brother. All the best for Voices From The Darkside! Hails!"