To make something exclusive this time I’ve done a mix between a review and an interview. My victim is mastermind Billy of DEATH COURIER. To all of you who never heard of this band before we’re talking of a Greek cult band of the heydays (fall 80s, early 90s). If you’ve never heard about them give them a try and listen to their amazing "Necrorgasm 7" EP from 1990, one of my favourite seven inches ever! Their debut full-length was the excellent "Demise" LP from 1992 which now is sold for more than one hundred of Euros. This is actually their 2nd effort. The main offer is still there: purveyors of hellenic Deathrash with great melodic riffings. The production is way better than on the first releases even if the songwriting on the past material was slightly better, at least to me…

After only 26 years from the inception, DEATH COURIER are back with the second effort. Just laziness or have you found many problems to reunite / finding the original strength of the heydays?
"Initially I was pretty lazy. All the old members only had the chance to give a part time job to the band. So I could not find the right musicians in my hometown to play with. Until 2010 when I joined forces with George (guitar) and Stathis (drums)."

Actually this second effort is almost (6 tracks out of 9) the release of unfinished material recorded back during 1996-97 when you, Billy, tried to resurface DEATH COURIER after 4 years from the last sign in 1993… In which way, if any, are the new three tracks different from the past material? Nine tracks, but actually only 21 minutes: so not that many riff-solos or decorations; just pure in your face Deathrash…
"Six tracks were finished in a different way but not recorded yet. The new DEATH COURIER line-up put the final touch to create our new status of small lasting and blasting Death Metal in a form to stick in your mind. We think that this way is the right way to shock, yet complete and essential!" 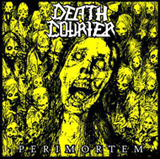 From the original line-up only you survived. Were the former members Theo and Jimmy not interested to take part in the reunion? Are they not into Metal anymore? Instead two youngsters joined by the names of Stathis and George. Present them to us: have they a past in any other vessel?
"Jimmy is still close to the band but doesn’t play drums anymore, whilst unfortunately Theo died last year (2012) by heart attack (rip). George is the new guitar player: he is active also in the local Death Metal band VERMINGOD; Stathis is our drum player, comrade of George in VERMINGOD until last year. Now he only kills with the COURIERS!"

The "Perimortem" MCD looks like a self-release, having just a mark on the CD surface like Z50143 and no sign of a label mark. Have you tried to find a proper label or no interest at all? So I guess this is pretty limited, isn’t it?
"We had many proposals for "Perimortem" but we needed this release to be a low price one and yes it’s limited to 1000 copies!" 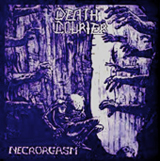 Some month ago the "Immune To Burial / Sharing The Loot" split 7" with CONSPIRACY was released. Actually CONSPIRACY is a Hardcore band. Do you think it has been a good choice to do a split not with a Thrash / Death band? From what I’ve understood it got an amazing response in terms of sales figures, hasn’t it?
"That 7" you mention was a friend’s release, something like a test drive for us. It had a very good response. It’s sold out now!"

The new era has just begun, any future plans or is this just the intention to give justice to the 96-97 era?
"We played in Athens at "The Brutality Over Sanity" on May 25, 2013 with headliners DEFEATED SANITY. Now we are planning some concerts this fall and we are creating new killer material and waiting on our first LP "Demise" to be re-released in spring 2014 by Nuclear War Now Records in memory of our first guitar player Theo. Greetings to all our friends and thank you Nicola for your time and support. Mega thanks to Frank Stöver for the help and support. Billy, DEATH COURIER 2013."