I already interviewed ENTRAILS a few years ago as I was really impressed by their debut "Tales From The Morgue" (2010). At that time, ENTRAILS succeeded with virtually no effort to combine this typical Swedish old school sound with very melodic parts without losing their aggression. Their second album "The Tomb Awaits" (2011) only confirmed our first impression. To promote this album, ENTRAILS stood on the stage of several underground festivals. Metal Blade obviously liked what they saw, offered the band a contract and just released "Raging Death". We sat together with guitarplayer Jimmy Lundqvist to have a chat about the new album… 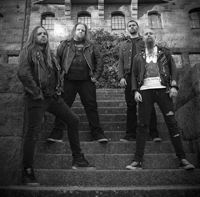 "Raging Death" is your third album and will be released through Metal Blade. Did you therefore approach the songwriting of the album even more focused, knowing that the album will have much more impact since it’s released by Metal Blade? Why do you think Metal Blade picked you up?
"Yes, that’s right. Now it’s Metal Blade’s turn to unleash some Swedish Death Metal. But if we were more focused on this one than the previous albums is not easy to say. I think it was pretty much the same focus in every way, though we knew that we had to make an even more rotten and better album since we had put "The Tomb Awaits" in a high bar to break. Hopefully the fans will enjoy this new album. It has many faces of groovy, catchy, fast and slow Swedish Death Metal, I think. Metal Blade liked what they heard from us on the first two albums and could also see where we were going. And by that, they contacted us with a proposal."

The logo of ENTRAILS has been adapted a little bit for this album. Also the cover looks maybe a bit more professional. Was this all the band’s idea? Or was it suggested by the label?
"Yeah. We in the band decided to change the logo a bit to fit the music we play in a better way. Nothing else! Also the cover is done in a more brutal and detailed way. We knew the skills of the artist, so he had a bit more ‘a free hand’ in doing this one." 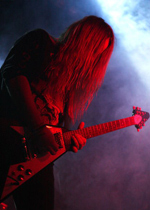 In the past you already recorded a cover of DISMEMBER’s ‘Casket Garden’. For this album, you recorded MARDUK’s ‘Dark Endless’. Why MARDUK? Is this your way to pay tribute to the Swedish scene?
"Well, why not? MARDUK was a huge inspiration in the nineties when they unleashed their debut. For this album, Metal Blade made the request to record a cover also. We decided that we wouldn’t go for a typical Swedish old school Death Metal band this time as our version wouldn’t sound much different from the original. The MARDUK cover is also just a bonustrack on the digipak and the vinyl version."

The special edition of "Raging Death" also has a bonus CD featuring the entire show ENTRAILS played at Party San Open Air 2012. This is actually a very smart move as it’s a sort of ‘best of’ set of the first two albums and an ideal introduction to the people who are not familiar with ENTRAILS yet. Is this also one of the main reasons why you did this?
"Both yes and no. We thought it was the right time to release a live show. Party San has become a rather classic festival in the past years and therefore it was easy to choose which performance should be put on a bonus disc. And it is also – as you said – an ideal introduction for those who haven’t heard us before."

For the first two albums, you sort of ‘recycled’ a lot of material of old demos. Is the material on "Raging Death" all new and in case yes, would you say that it was difficult to come up with new stuff?
"The answer is no! I still had some riffs and parts left to pick up and used them here and there on several songs. As for the new stuff I had to write, it wasn’t that hard to do. When I am in the right mood I can write a song in a few hours."

Which songs are your favourites on the new album and why? Personally, I think ‘Bloodhammer’ is pretty strong.
"To be honest, I like them all since they all have their own personality and style. So, I can not say which ones are the best songs on the album."

The long outro of ‘The Cemetery Horrors’ reminds me very much – regarding melody and atmosphere – on the outro of the ENTOMBED classic ‘Left Hand Path’. Any comment?
"We try not to compare our music to the music of others. We like to compose our own versions of every song. ENTOMBED used the soundtrack of the movie "Phantasm" as the inspiration for their outro. Of course ENTOMBED have inspired us but we prefer to make our own songs instead. And as ‘The Cemetery Horrors’ has a horror theme, I tried to make our own movie theme instead. Nothing more."

I‘d say that "Raging Death" is a good album but if I can be totally honest, I really prefer your first two albums to this one. On your first 2 albums, you had tracks that stood out. Take the great solos in ‘Stormy Death’ (from your debut) or the great harmonies and melodies in tracks like ‘Crawling Death’ and ‘Undead’ from "The Tomb Awaits". It’s difficult to find tracks on the new album that really stand out and have these great melodies and solos, I think. Any comment?
"Everyone has the right to their own opinion. And you have just told us yours. We play the music we want to listen to ourselves. Otherwise it wouldn’t be cool to pick up a guitar and make riffs. We wanted to do more then just playing straight forward Death Metal like we did before and explore more horizons, so to speak. It’s also impossible to write songs that have ‘it’ for every listener. Every band has this problem!"

Why should Death Metal fans who have never heard of ENTRAILS before check your album out? What would you say makes ENTRAILS stand out from all the other (Swedish) Death Metal bands around?
"If they are looking for some good old classic styled Death Metal, they should definitely check us out. We don’t try to play as fast as we possibly can but rather write songs that will stick in your head and stay there forever. Like it was in the early days with many of the better Death Metal bands. We really prefer to hear what’s being played and write stuff that makes your neck swing. That’s way cooler than coming up with hysterically fast tunes. That just doesn’t fit us."

You have many guest vocalists on the track ‘Death League’: Jörgen Sandström, Rogga Johansson, Dan Swanö and even Kam Lee. Can you tell a bit more about how all these contributions came together?
"The idea we had in the beginning was to have even more singers! But when the song was done, it turned out that there weren’t enough parts for each singer and so we shortened the track a bit, in order to fit four guests. Then we began to ask guys we wanted to participate on the song. It wasn’t that hard to get an enthusiastic ‘Hell yeah!’ from all the guys so that part was done really quick. They got their lines to sing, after a few weeks I received all the files and then Dan Swanö mixed it."

Last year, you also released a split album with the band OMINOUS CRUCIFIX. You recorded two new tracks for that release, ‘Human Decay’ and ‘Depression’. What was the idea behind this release? Will these tracks also be released on CD?
"Those two tracks are in fact two old ones that already appeared on our first two demos which were recorded in 2009. The only thing we did was a remix, in order to make them fit to our today’s sound. The idea came from a Mexican dude who asked us to join. And since we hadn’t been on a split album before, we didn’t hesitate."

You seem to work in a very high tempo. "The Tomb Awaits" was recorded in September 2011 and not even one year later, you were already recording the follow-up. Are you just used to working fast or why do you want to put out material so fast? Wouldn’t it be better to maybe spend some more time on arranging your material?
"Well, "The Tomb Awaits" was actually recorded during the summer of 2011, mixed in July by Dan Swanö and then released in September 2011. I began to work on "Raging Death" in January 2012, in March I had thirteen songs ready which we rehearsed and in the end we recorded ten of them for this album. Is that working fast? Hmmm. As we don’t play a lot of shows, I have plenty of time to be creative. It’s my passion to write songs and work in my studio. I also don’t see what’s wrong with the arrangements on "Raging Death". We aren’t a band who actually want everything to be totally perfect. That would ruin the old school feeling! Releasing your music rather fast is also an important thing today, I think. Fans don’t want to wait a long time." 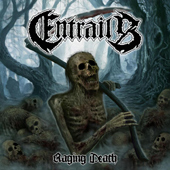 Up till now, you didn’t play that many gigs. Would you say that ENTRAILS is already a good live band or do you think you still have to practice a lot to really make an impact?
"It’s correct that we don’t play that many shows but there are many different reasons for this. We are definitely not a band who jumps around like a rabbit on stage. When we go up on stage, we deliver some damn good music instead. Posers who stand still during their performance are not exactly fun to watch if you ask me. Headbang as hell and really deliver the tunes to the fans suits us way better."

So far, you mainly played shows in Germany and Sweden. Now, with "Raging Death" released through Metal Blade, are you going to do longer and bigger tours? Can all of you get some time off from work easily?
"We have nothing booked for the moment but you never know what will happen. If something comes up and everybody is available, we are prepared to do some serious travelling and play a lot of shows. I don’t have any special band in mind that I want to be on the road with but if DISMEMBER had continued their journey those guys would have been fun to tour with."