The Swedish Death Metal band MIASMAL made quite an impact on me with the demo and the single they released so far. MIASMAL was founded in 2007 by Magnus (guitar) and Pontus (guitar, vocals). When Micael (drums) and Ruben came on board a few months later, the band was complete. Fans of bands like old ENTOMBED, AUTOPSY and REPULSION will most likely appreciate MIASMAL as well. The band sounds very raw and unpolished but nevertheless knows how to write decent songs. I contacted bandleader Pontus in Gothenburg.


MIASMAL exists since 2007. How did the band actually get together? Do you know each other already fora long time?
“MIASMAL was formed by me and Magnus, the other guitarist. We quickly recruited Micael on drums and rehearsed as a trio without a bassplayer for a few months until Ruben entered and MIASMAL was complete. Most of us knew each other before and were into the same music. We formed the band because we wanted to play Metal, focused on good songwriting and groove instead of technicality and virtuosity.” 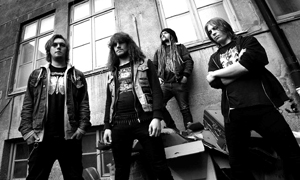 In 2008, you released your first demo – simply called “Miasmal” – which was later on also re-released by Detest Records. Was it easy to come up with own material? How do you look back at this demo now?
“It was actually pretty easy to write that material, I still think it’s fucking great. Most of us had recorded previously, but we had never been to a studio before with MIASMAL as I recorded it all in the rehearsal room. This procedure has continued since we’re comfortable with it and manage to get the sound we want by ourselves.”

How did you get in touch with Detest Records? Did Jerry contact you? It seems like you co-operate very well with each other?
“I think it was Micael who first was in touch with Jerry so I don’t know the background exactly. But when he heard our demo, he was into it right away and wanted to release the cassette. Our co-operation has been great, Detest is a great label and Jerry is a nice and trustworthy guy.”

In 2010, you recorded a single with 2 new tracks, also released by Detest Records. Would you say you progressed a lot as a band when you compare it to your demo?
“No, not at all. It was recorded the same year and follows the same path. The production came out a little different but that’s it, at least in my opinion.”

Your sound is obviously very inspired by bands like old ENTOMBED, CARNAGE and GRAVE. Do you agree? What is it that made these bands special in your opinion? Are you somehow proud to come from Sweden?
“Well, sure those bands are an influence. Especially ENTOMBED for the insanely great songwriting they had already at their first LP. I wouldn’t say I’m proud to come from Sweden. But of course it’s stimulating to live in a country with a vibrant, creative underground music scene.”

MIASMAL hail from Gothenburg, known for more melodic bands like DARK TRANQUILLITY and IN FLAMES. Nevertheless you seem to orientate yourself more to the Stockholm sound.
“I’ve never listened to those "Gothenburg sound" bands. I have never been interested, and I don’t think they’re any more popular in Gothenburg than anywhere else. I never really cared that those great bands from the early nineties were from Stockholm either since I wasn’t around in the scene back then. Good music is good music.”

It seems to me that even now, Sweden just keeps on breeding new and interesting bands. This is not that much the case with countries like for example the Netherlands or England who used to have a great scene as well. What’s the biggest reason for this do you think?
“I really don’t know. Perhaps it’s because the musical climate gets people interested in creating something themselves. Lots of shows, great bands inspire people perhaps. But it’s a hard question.” 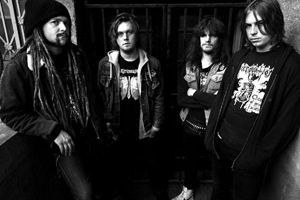 You recently released your first full-length album, simply titled “Miasmal”. Do you think this album really represents MIASMAL well as a band?
“The albums is thirty-six minutes long and has eight songs. One track can be heard on our myspace page. I’d say the evolution might be that it’s slightly more varied than before, since we really wrote this as an album and not just as separate songs. You know, paying attention to the feel and flow and what was needed to get a great album. No big surprises I think! And it is definitely representing MIASMAL, it turned out just as good as I wanted it to. I am already very happy with the achievement of creating it and that it is properly released. Of course, positive responses are always welcome (laughs). We also are eager to play these songs live.”

The cover of the album shows a sort of giant and dark hole. What’s the main thought behind it? What would you say are the songs on the album dealing with?
“I won’t go into any details here. The dark hole contains what you want it to. Some of the characters and phenomenas in the lyrics might be a good guess. The lyrics are deliberately abstract. But I can’t help being influenced by the feeling of impending doom all around us. To overcome the apocalypse, or to be swallowed by it, that’s the question.”

Your debut album is released on CD by Dark Descent Records and on vinyl by Detest Records / Me Saco Un Ojo. The CD version also features all the tracks from your sold-out demo and your 7". I guess you think it’s a good idea to combine all your tracks on one CD?
“Yep, we had some loose plans of doing a CD with the demo + the 7" tracks a while ago. Then we thought, why not just put it as bonus track on the full-length CD? It saves you some space and money! I am personally very much into vinyl and I pretty much never buy CDs anymore. I don’t collect vinyl though, I just buy the stuff I like.”

Have you already played many gigs so far in your career? Any outside of Sweden? Would you say that MIASMAL is a good live band? What can fans expect from a liveshow of yours?
“Up until May, we had only done two gigs so far, one at the Kill-Town Festival in Copenhagen, Denmark and one at the Nuclear War Now Fest in Berlin, Germany. Both gigs were played last year. I’d say we’re a good live band that will get better. People can expect our songs to be performed with dedication and intensity, nothing more nothing less. In May, we went on our first US-tour which was really special. We were contacted by Timmy, the man behind the festival Chaos In Tejas. He asked us if we wanted to play and if we were interested in doing a tour in connection with the festival. We said yes and also got a gig at the Maryland Death Fest. We had to put flight-money upfront but that was not too bad. None of us has kids which makes such a decision easier of course. When we got back here, we had to live on pasta and baked beans for a while since the bills still had to be paid (laughs). Both festivals and the whole tour were really great! Checking out AUTOPSY, DOOM, DEATH BREATH and NEUROSIS was a blast!”

Anything you would like to add?
“Just thanks a lot for the interview and support! Cheers!”