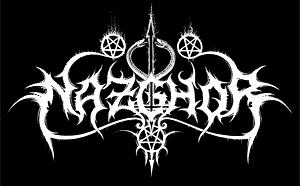 The review from one of our contributors made me curious about this Swedish evil Metal force. "Life Impaled" had a quite positive impact on me with its fast, harsh yet melodic brand of blackened underground Metal. It recalls somehow the great times when supreme Black / Death Metal hordes from Sverige like MÖRK GRYNING, DISSECTION, NAGLFAR, VINTERLAND or even SACRAMENTUM (just to mention a few) ruled the land back in the mid 90s. Even if there’s of course room for improvements in some aspects, NAZGHOR sounds fresh and passionate with the stuff they’re doing – call it youthful unconcern or enthusiasm or whatever. Sweden proved once again that it can always come up with killer hordes from its neverending pool of talented and very skilled warriors of Metal. In the end I couldn’t help getting in touch with them for a short conversation. So it’s time for you to delve into the dark realms of NAZGHOR…

Infernal greetings Nekhrid! I suppose not many of our readers are familiar with your evil horde. So can you please bring some dark light into this lack of information and give us a brief history about the creation of NAZGHOR. Who are involved in it and do other projects exist as well? 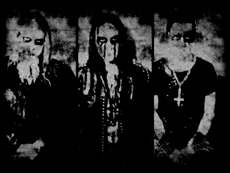 "NAZGHOR started as a duo in November 2012. I and Armageddur had long wanted to create something dark as well as melodic. We talked alot about music, message and deliverance and now the time was right. We are deeply familiar with the Norwegian Black Metal scene but when it comes to what we want to portray we went back to our Swedish roots. We Swedes have a great heritage in DISSECTION and of course BATHORY. We felt strongly for what we were creating and felt that these dark notes needed to be heard so we put together a constellation of unknown musicians to make a few live gigs. We come from a city that is known for its unholyness and there are two well known bands from Uppsala that tour the world and spreading the dark message. Today NAZGHOR consists of four like minded musicians."

My name mate Michael (Kujawska), who did the review of your "Life Impaled" album, wrote in his article that your stuff reminds him heavily on all the great Black / Death Metal outfits which were spread by labels like No Fashion or Wrong Again onto this planet in or around the mid 90s. I just can agree with him as your music has a lot in common with those acts, just maybe with a little bit rawer approach. What’s your opinion about that fact and which bands influenced you most or made you start to rise from the deepest abyss?
"As previously stated early DISSECTION and BATHORY are great influences. And it’s not the first time we have heard someone connect us to that period and if our album was released 20 years ago, it probably would have been by No Fashion. So he is not mistaken there."

As I haven’t been able to hear from NAZGHOR before (shame on me) I would like to know if the songs are all new on the album or are these demo recordings (due to the raw character of the production) which have just been properly re-released.
"Once we began creating in the name of NAZGHOR, everything went quite fast. We had so much of what NAZGHOR is within us and we wanted to create an album right away. Just 6 months after that first night we released "Life Impaled" digitally. The sound of the recordings are appropriate for the debut as we recorded everything in a dirty basement over a short period of time. We wanted to get the ambience of that "filthy" old school Black Metal, and I think we did." 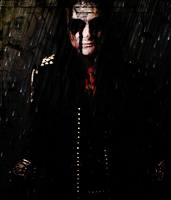 Your debut was unleashed onto this planet by a small Ukraine based underground called Dead Center Productions. How did you come in touch with them? Is this a one album deal only or did you sign for further colaboration with them. And how is the work with them? I can imagine that it isn’t so easy sometimes due to the distance between Sweden and the Ukraine.
"Dead Center contacted us after having heard our album on youtube. By then the album had been out for about 3 months and we didn’t really have any thoughts of releasing it in physical form and were already focusing on our next album. But they made us an offer to release "Life Impaled" and we accepted. Working with them has been good, considering all communication is through email."

Did you get some offers from other labels (native based and abroad) as well and how was the album received so far?
"So far the feedback on "Life Impaled" has been nothing but positive. We keep recieving offers to release it on other formats and a cassette tape will be out in the near future."

In your letter you told me that there will be a second album by your blashemous force soon. How is the progress of the recordings and what can we expect from the upcoming material?
"We are in the final phase of the production and we will soon reveal a release date for it on Facebook. This new album is a compilation of different aspects that comes from the inner most core of what NAZGHOR is. It will be "Life Impaled" times 10, with more extented and strengthened songs, and maybe some unexpected elements."

How about shows… were you able to play often live up to now and with whom did you share the stage with so far? 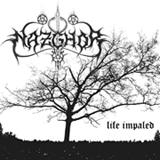 "We had our first live gig on February 13, only 3 months after NAZGHOR was born. Since then we have only played live a handful of times together with other underground Death and Black Metal bands. Not due to lack of offers but we decided early on to focus on making our record."

What stuff are you interested in besides being total dedicated to our beloved music?
"I have always been an artistic person and spend alot of time reading, writing and elaborating our stage shows."

As I am always curious about what other people enjoy listening to… what stuff is on your current playlist at the moment? Your all time faves / classics?
"My musical interest is a wide spectra ranging from classical to extreme. My playlist consists of thousands of songs but to name a few, the first three I see on my shuffle list are "Secular Haze" – GHOST, "Nights Blood" – DISSECTION" and "Laukr" – WARDRUNA."

Thanx so much for the time to answer this. If you like to tell a special message to our readers – it’s your turn now…
"The essence far beyond time and existence is closing in. Wearing the cloak of our dark lord. Its eclipse shrouds the starry sky. It is nearly upon us… the darkest season."