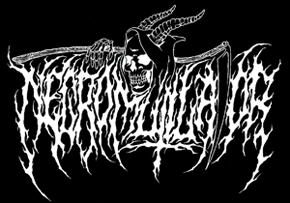 NECROMUTILATOR hails from Italy. They are a power trio playing a savage brand of Black / Thrash Metal deeply rooted in the early 90s. Active since 2009 and with just one demo tape released in 2011, their debut album was already due. "Eucharistic Mutilations" (2014) is a great album worthy of your time and money. P. (vocals and guitar) was kind enough to answer some questions regarding the band’s past, present and future…


Looking through your background, I found that you and E. are also members of the Black Metal outfit INVERNO. You are also vocalist for yet another Black Metal band, VOLLMOND and the sole member of the Funeral Doom / Black Metal band OBSCURITATEM. It seems you all are involved in other bands and projects and yet, you still have time for NECROMUTILATOR. How do you manage your time and dedication for all your music interests? Do your other bands influence NECROMUTILATOR directly?
"Well, all the energy we can put today converges into NECROMUTILATOR. You named all dead bands / projects (except for VOLLMOND which actually is not managed by me and is a slow-working band anyway) but I hope to get more time and dedication in the near future to resurrect what is lifeless now or maybe to again create something, who knows… Anyway NECROMUTILATOR is not strictly a development or evolution of our old bands. It’s just like a nuclear bomb I wanted to activate many years ago and now it’s like a self-feeding beast." 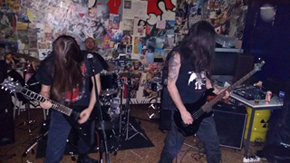 It would be obvious to conclude that you formed NECROMUTILATOR since you have played together in other bands. But this time you are covering another style that, even if not too far from your main Black Metal concept, is different musically. Did you feel the need to try out a different approach?
"Definitely yes. We all needed to try a different approach, a more aggressive, violent and annihilating approach. It started as a chemical reaction; a satanic poison coming together. Becoming NECROMUTILATOR was the solution to our need."

Let’s talk about your 2011 demo, "The Devil Arisen". 7 songs clocking 22 minutes is somewhat long for a demo tape, in my humble opinion. How many copies did the band sell? How was it received by the underground in terms of reviews and word of mouth? And how did you manage Cold Vomit Records to do a re-release back in 2012?
"We recorded "The Devil Arisen" demo in April 2011. And even if we actually had stuff for 2 demos, we did not give a fuck and recorded 7 tracks. Until the end of 2012 the demo was spreaded in CD-R with xeroxed cover and I think we distributed about 50 copies to friends and few others. At the time I managed a MySpace page for the band and I even sent some copies to 3 or 4 underground labels, hoping to get the demo printed and supported in the right way, but we had no success! So I started Cold Vomit Records in 2012, which is actually a very small label with a very small circuit of distribution and the third release was the printing of 100 hand-numbered pro tapes (of our demo). I traded the tape in different countries and sold or traded at gigs. Now it’s sold out. I think "The Devil Arisen" is very raw, but every first stuff should be!" 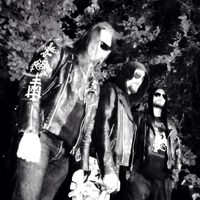 There was one line-up chance from the demo to your debut CD. L. used to handle the bass and now, E. has taken over. What was the reason behind it and how did E. settle in? Did he bring any new influences or has the music stayed the same since the inception of the band?
"I started the band in December 2009 with L. There were always serious intentions but (it seemed they came) only from my side. Unluckily, because of personal issues and lack of real attitude and dedication, he became the wrong member as time passed. So we got rid of him in summer 2012. E joined the band as bass player and suddenly the unity and the attitude were there so to become what me and R already wanted the band to be. The music style never changed, it just became more powerful and better executed."

Your debut album was released by Terror From Hell Records. Did you get offers from other labels before them? How has Terror From Hell treated you so far? Are you happy with their work?
"Actually no, we did not have any other offers. The Terror From Hell offer was good for us. And most important, Stefano is a close person to us, so we can trust him. We always have good communication and all things come in clear with him. That guy is awesome and sure, we are extremely satisfied with the work he has done supporting us. Terror From Hell is the mirror in which every underground band or labels should be reflected: passion before all."

I think "Eucharistic Mutilations" is a great record in its own. It’s awesome for a debut album. How has been the response to it so far, locally and internationally?

"Thank you for the words. Some reviews have been written and the response was good both local and international. I hope we can give the album the right promotion playing even more gigs!"

What is your main inspiration when coming up with new songs? Do you get together and jam or does each of you bring his own ideas? Who takes care of the lyrics and which topics do you cover with them?
"I think the songs come by jamming and bringing ideas at the same time. But I would like to say that the noise is born directly by our natural impulses. I personally take care of the lyrics which are basically about rituals, apocalypse, orgies, death and the Devil. I love satanic horror movies of the 60s, 70s and 80s. I always want to focus the worship on that magic, ancient image of the Devil impersonating the enemy, the opposition, the bringer of black light, the force beyond all moral laws."

It is obvious, since you included a cover version of BATHORY’s ’13 Candles’ in your album, that Quorthon is one of your main influences. Which other bands do you consider the backbone of NECROMUTILATOR as it stands today, both lyrically and musically? 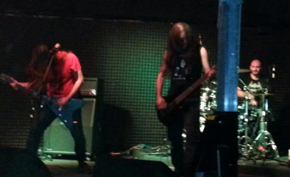 "BATHORY and VENOM have been a deep influence to the band. But I don’t think that differs from the way both have influenced other Black, Thrash or Death Metal bands. Probably our biggest influences are early 90s European Death, Black, Thrash Metal and Grindcore bands. We don’t need to be experimental or something, even if people hear some "new" influences in what we do. We just need to be an aggressive form of darkness and evil."

How do you see your local and national underground scene nowadays? Is it too hard to play gigs in Mantova? And how often are you guys playing outside your city? Do you have touring plans for the future?
"Mantova is not a big city at all but something is different nowadays compared to 10 or 15 years ago. Metal music is not for everyone and to find a gig is not so easy but not impossible either. There’s a good Hardcore / Punk movement here. They organize gigs very often, so places to play Metal gigs exist but they rarely happen. And Heavy Metal people are rare to find too in our area. By the way, I have to name a couple of good bands: PLAGUE ANGELS, which is a young Thrash Metal band and the legendary GENITAL GRINDER, Death Metal since 1990. Along with us, these are the only Metal bands that play seriously in our city. The national scene is very good I think. There is a high quality level of bands from north to south in my opinion. The non-stop rivalry combined with rip-off people and posers are the only issues of the Italian scene. Same problems, different days and places. Regarding touring, we don’t actually know at the moment.. We’ll see!" 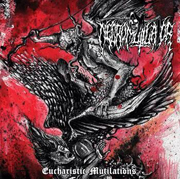 This is one question I always ask: the internet, a blessing to some, a curse to others. Where do you stand on this subject? Do you think bands should be bound to the classic ways of promotion or should they embrace the use of technology? How about file sharing and piracy?
"I think most of the fascination of Metal music is in the way of listening, buying and discovering it. Real Metalheads buy physical music formats (CDs, vinyls, tapes) and so the cult is still alive. On the other hand, the internet is perfect to discover and buy music. And it’s good way to do promotion for sure. Technology is good and it makes communication faster and easier. But I definitely prefer the classic way of promotion. I am doing tape trading in 2015. Maybe it makes no sense for the younger generations but it’s one of the things I do to keep the passion and the cult alive."

Well, this is the end. Thank you very much P. for all your answers and I wish you all the best! This last space is for your closing comments, band news or any other thing you want to add. Thanks!
"Thank you and HAIL SATAN."