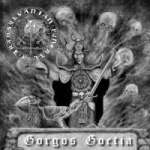 Whether or not you go into it with the knowledge that A TRANSYLVANIAN FUNERAL is just one guy, you’re still going to be listening to a pretty solid Black Metal album. Since I’ve already spoiled it for you in the first sentence, you, like me, probably think this guy, Sleepwalker, is some sort or schizophrenic genius. I love fast Black Metal’s wall of sound effect, but it’s neat to hear every instrument as clear as a Swedish glacial water runoff. Even more surprising, Sleepwalker is from Arizona. I suppose that’s why the entirety of this effort, from writing, composing to production is completely his own. It’s a hell of an accomplishment for someone living in the American desert. Compared to his earlier releases, there is just the slightest touch of a lo-fi edge; there is a soft ambient hum in the background, a slight buzz to the cymbals and the vocals are tinged with crackles. There are some points in the song where the vocals lay in the track almost texturally as they stay pretty low and throaty with minimal projection. As the songs pick up, they get swallowed and you’re left with that edge of growl- more added crunch if you will. This album is a real standout for solo Black Metal artists who tend to go the electronic route; Sleepwalker boasts a lot of speed with the fluttered guitar and thumping repetitive drums while still creating a sense of atmosphere often attributed to most Black Metal acts. It is charging and rough yet slightly echoed and cold as if you’re sprinting your way through a dark forest. The chaos is within your own lungs, your throat and the fear in your mind yet it will always be muffled by the vastness of the icy and engulfing surroundings. I know I’m listening to good Black Metal when I get this feeling, whether it’s one person or a full band. The opening track, ‘Cold Blood And Darkness’, creates atmosphere through ominous guitars that are given the right amount or airiness; they are only lightly tethered to the rest of the track and seem to float off into nebulous smoke signals while the drums, slightly clunky, drive the song throbbingly forward. ‘Mars Exalted In Capricorn’ features a little more riffage, though utterly lightning fast to the point that they bleed somberly together. The final song ‘Goliath Resurrected’ creates a farewell with one of Black Metal’s underdog characters, bass. It plays off the album nicely and almost serves as a reminder that it was too was there the whole time and yes, it was still Sleepwalker playing it. Check it out if you like Black Metal or even if you don’t; its a great testament to how bewildering and introspective the genre can be, especially when you’re playing it all by your damn self… www.facebook.com/atransylvanianfuneral, www.forbidden-records.com