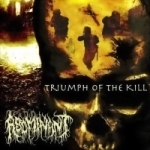 Hm, not that easy to describe what ABOMINANT come up with on their seventh album. Obviously a hardworking band and very proficient on their instruments, the five guys from the US deliver a powerful, mixture of fast and pounding Death Metal with lots of melodies which sound slightly Scandinavian-influenced. In the title track the allusions to some melodic parts on the latest VITAL REMAINS album are more than obvious. Maybe this rough comparison describes ABOMINANT the best way, just that there is a bit more of a Thrash Metal vibe present as well – the same goes for the Heavy Metal influences mentioned in the review of “Conquest” which can be found elsewhere on these pages. The vocalist reminds me slightly of Peter from Vader, yet he is more throaty, some higher pitched vocals are thrown in as well here and there. Just like VITAL REMAINS I would really like to see ABOMINANT in a live situation because on CD this is absolutely not my cup of tea as it is far too melodic for my taste. www.deathgasm.com