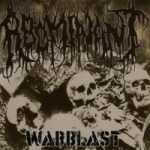 Should you find yourself wondering if this band is indeed one of the many newly reformed old school acts of yesteryear, you would be half correct. ABOMINANT began in the mid 90s, long after the old school had begun to die away. The musicians who founded the band, though, were active in the scene long before its demise, making ABOMINANT one of those comparatively rare groups who knew what they were doing in an age of recycled crap that, arguably, continues to this day. Musically they are a smorgasborg of sounds, mostly originating from the Floridian, and Swedish scenes of whose august participants, MALEVOLENT CREATION, CARNAGE and MORBID ANGEL, lend an influential kick in the rear to ABOMINANT. There is one peculiarity which owes its presence to the second wave of Black Metal. A strong tremolo line, smelling of MARDUK and DARK FUNERAL is in almost every song. Take heart, and never fear, all ye who despise Norsecore Metal. This does not suck. www.myspace.com/abominant, www.abominant.da.ru, www.deathgasm.com