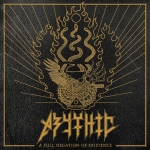 ABYTHIC are a new spawn of venomous old school Death Metal hailing from Germany and France as at least their facebook profile description cites them. Because of not being represented throughout the internet that well, the only other information besides their origin I have, is that this band is a new project of former members of bands such as IMPURE and ASPHIXIATION. So what do ABYTHIC deliver with “A Full Negation Of Existence”? Basically exactly what one imagines to get when reading things such as venomous Death Metal. The MLP starts off with some guitar feedback that immediately emerges into GRAVE-esque ufta ufta passages. Not really fast but not slow either. The vocals of HM also remind to a certain amount of the likes of Jörgen Sandström, LG Petrov and so on. So we definitely have a very Swedish influenced Death Metal release here. ABYTHIC deliver the overall package of Death Metal trademarks from playing faster, slower, swirling riffs, stomping riffs and graveyard melodies all combined with the good old HM-2 distortion sound. The second song ‘Murder Of The Clayborn’ starts slower with a very darkened mood just to immediately shift into faster alternate picking which only gets slower again by the end of the song. ‘Return To The Origin’, as the third song is called, starts with a rather unusual guitar lick that leads into a more goove oriented first verse followed by the above mentioned formula. The fourth and last song is probably the most inconvenient on the record since it’s a short semi-instrumental introduced by clean guitar picking. Rather focused on a gloomy mood than aggression it never gets fast but rather stays at one tempo throughout the song only to be finished by a female choir and organ. ABYTHIC definitely deliver a well-crafted piece of timeless Death Metal paying tribute to what was going on in Sweden around the early 1990’s. Fans of GRAVE, ENTOMBED, DISMEMBER but also ASPHYX should definitely check out this release (the actual playing time of this release is only 18:33min, because "track" number 5, which is not even mentioned on the cover, is nothing but sounds of wind and storm – Frank). To get the putrid information you need check out the following links: www.facebook.com/abythic, www.metal-inquisition.de