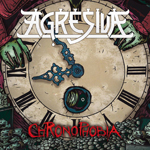 So, Spanish Thrashers AGRESIVA decided to put out a new 4-song EP instead of another full-length studio album. This may be a clear indication what’s to come from them in the near future, I suppose. The "Chronophobia" EP introduces a bit more rougher sounding Spanish Thrash quintet this time. Especially the guitars’ tone is way heavier and crispier sounding this time compared to the one they had on their debut album, "Eternal Foe", released 2012. Both new songs ‘Ecstasy And Lust’ and ‘Chronophobia’ come to our faces like a hail of sharp nails, offering a good and violent fun, the AGRESIVA style. *Electric Fence’ is taken from the band’s 4-track 2010 demo titled "Sent To War", serving well its purpose as a part of this EP but somewhat surprisingly the brightest crown of the whole EP is saved for the last. It’s a cover song of the Argentinian Thrash Metal act MALICIA; a song called ‘El Trastorno De La Envidia’ – and sung in Spanish. AGRESIVA have given a nice treatment to the original version of the song, basically stayed loyal to it but simply updated it a bit – and sort of putting their own spices into it. While waiting for the band’s next studio album, "Chronophobia" works out as a tasteful snack before the band will serve their main meal on the dinner table. More about AGRESIVA at: www.reverbnation.com/agresiva