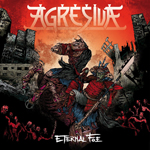 Water-damaged discs are always a bit more challenging to review… I mean, if you also want to have a look at lyrics (if they have some included) besides the music – just to get a better insight about things that are revolved around bands even lyrically. Spanish Thrashers AGRESIVA’s debut album, "Eternal Foe", which they put out in 2012 by themselves, had obviously sucked water more than a little filthy sponge before finding its way to its final destination. Due to this water damage all the pages of the inner sleeve were stuck to each other, leaving no chances to get familiar with the band’s lyrical content at all. Oh well, then again, it’s always the music that should count – and gladly the disc itself was in a playable shape (although obviously went through a dishwasher too). AGRESIVA draw its influences from the Bay Area tinged Thrash Metal, albeit probably having a teeny-weeny more melodic approach to their songs than many of their Bay Area sounding Thrash comrades. This Spanish Thrash quintet plays tight and they play well, having a good fistful of kinda unique ideas incorporated into their songs that sort of work as a return ticket back to this album again – at least occasionally every now and then, I believe. They really don’t remind me of any specific band out there but some of their riffs do have a strong early METALLICA or EXODUS flavor to them, which cannot be a bad thing by any means. Samuel on vocals, does his share well on the record too, sounding somewhat diverse with his vocal parts – and like the type of guy who could easily sing in some more traditional Heavy Metal, or Power Metal band(s) too. At times his vocal parts remind me of US GRIFFIN’s William McKay, which can be considered another good sign, I suppose. He’s definitely good at what he does. Other than than, it’s kinda tough to find much to be complained about this promising debut of theirs. It definitely is a decent release all in all, offering just a bit more than your familiar load of meat and potatoes so to speak. This is a worth checking disc – and if you decide to order a copy of this straight from the band, ask this preferably without a dishwasher treatment if you want to read the lyrics, too. More about AGRESIVA can be found at: www.facebook.com/pages/agresiva-metal-band/361354679227