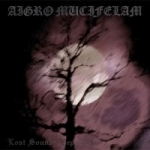 Insidious Poisoning are offering again a very extreme release even for Black Metal standards. AIGRO MUCIFELAM is a side project of Krof, member of MALEFICUM ORGIA and I think that even Black Metal fanatics from France will not categorize both bands as one of their leading acts. To avoid any misunderstandings from the start I think that “Lost Sounds Depraved” would be a much better release with a suitable sound. Some call it a pure underground production – I can only call it a waste of energy. As we are talking about metal it would be lovely to hear any guitars, vocals or drums but all instruments are one massive sound wall and you need several times to get to the core of this release. The music itself is nevertheless worth to be reviewed here. We are talking about 7 untitled tracks of furious underground Black Metal which had been recorded in 2001/2002 and they are finally available as CD or on good old vinyl. AIGRO MUCIFELAM ‘s debut is for sure not of the best releases since months but the pure aggression makes me think of early Black Metal diamonds and after so many bands which obviously lost track of the true meaning of Black Metal it’s good to hear again such a raw version. “Lost Sounds Depraved” is a pure underground release and as such only suitable for the fans of ugly and raw Black Metal, means Black Metal in its purest form. www.insidious-poisoning.com