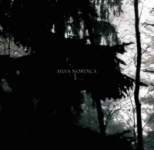 Not to be confused with the already existent hundreds of alastors in the scene here we have the Austrian one gracing us with their long-awaited debut album "Silva Nordica". This trio are not newcomers to the scene given that they have been around since 1995 establishing them as one of the oldest Black Metal acts from their scene. So far they have released two demos plus an EP (nice cover!) and after a long time away from the scene they strike back with this, their very first album on Ashen Productions. ALASTOR currently performs a pretty unmistakable form of Black Metal the nordic way but definitely adding a variety of moods to the compositions that will make their music more appealing to the Black Metal pletora of followers. Eventhough being a very well executed / crafted album, their approach is everything but original or innovative. The Norwegian influence is more than obvious (most likely SATYRICON and IMMORTAL). Production-wise I really dig its cold atmosphere but I think the programmed drums (or at least they somewhat sound like that) should have been treated to avoid that "plastic" or even "weak" sound that ruin a little bit the charm of the songs. All in all I consider this release as a positive starting point for the band that may anticipate better things to come. Contact them at: www.ashenproductions.net.