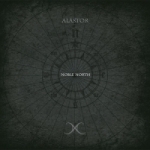 ALASTOR are a Black Metal band hailing from Austria and have been around for 11 years already although I have to admit that I hadn’t been aware of their existence – too bad, really!! The very strong "Noble North" is their second release after the debut "Silva Nordica" and 3 demos before that. Some of their members can also be found in bands like HELLSAW, SANGUIS, ESCHATON and some others I haven’t heard of either. There is a huge northern influence to be heard on this release but not in the so often adapted DARKTHRONE style but more of the old SATYRICON and ENSLAVED. A lot of tempo changes, different riffs and moods, a good musicanship and a clear and strong up-to-date production would have made "Noble North" definitely a milestone if it would have been released 10 years earlier. Still this is a very strong release and a pure joy to those who think SATYRICON and ENSLAVED have left the attitude and sound for which we loved them when their first records got released. ALASTOR is full of energy and (own) ideas and does not sound dusty and anachronistic in any way. You should also risk an ear if you are into "newer" bands like SECRETS OF THE MOON or SONIC REIGN – I’ll bet you won’t regret it. Highly recommended!!! www.alastor.dr.ag, www.no-colours-records.de