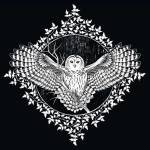 I have heard the term “Cascadian” Metal some time ago. Never cared about tags that much, as with time the only way I can tell if I like a band or not, is by listening to it. Not listen to just one song, but in most cases trying to listen to the discography of a band (if time permits) to really have a good idea of what the band is, how they change and mature through releases, and what is what they want to say with their music. In the case of American ALDA, without even searching for info on the band, it strikes me as a mixture of acoustic and ambient music with some traditional melodic, yet grim Black Metal. The titles of the songs are, well to put it in simple words, quite earthly friendly, as wind, water, and green can only be related to nature. So if Black Metal is about hailing Satan and occultism, at least in a very explicit way, then Black Metal this is not, it just has that sound in their metallic approach. Think of BURZUM and DARKTHRONE mixed with acoustic passages. The acoustic passages are quite good, and set the mood for the music, something that is quite interesting in itself. Their Black-ish Metal parts are nothing memorable, yet well done. This is actually a re-issue of their debut album, which in itself actually was made from parts of their demo, so the band was still young and searching for an identity, which I think they have definitely found in later albums. Fans of very atmospheric kind of Black Metal with ecological lyrics (reclaiming mankind for the damage of this world) will probably find something in this release. www.facebook.com/alda-116289091792839, www.eisenton.de

Julián “Venom In The Waters” Núñez

Julián “Venom In The Waters” Núñez