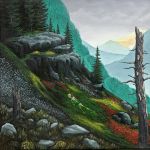 Cascadian Black Metal… if for some reason you have not heard about the term, it is the way to describe a form of Black Metal that is done in some places in the USA, specially those close to the Canadian border. The word also evokes some sort of mystic aura, and folk influences, to speak so in a way. But more than that, these bands have a similar way of approaching Black Metal with the use of many acoustic parts, that have more in common with Progressive Rock, Post Punk and more traditional Heavy Metal, mixed with harsh Metal vocals and some tremolo picking, but always keeping an atmospheric approach and melody in the songs. In this case ALDA presents their fourth full length. Formed back in 2007 in Washington, this album truly shows a very mature band, specially the way it blends perfectly the aggression of Black Metal and atmospheric soundscapes. The lyrical themes are quite frankly very far away from what Black Metal is, dealing more with the forces of nature and the events that dwell within, rather than praising the horned one. By the way I use the term Black Metal here to refer to the music style mostly used by bands worshipping the devil, but in here it is used to worship mother nature (which could also be the devil…). On to the music, this is definitely a very interesting trip. The calm, instrumental sections that could fit easily in any relaxation music release, are blended splendidly with the guitars and those eerie melodies. Still, this music has a very distinct effect. Instead of evoking darkness and damnation, I can sense something very different. The music in here, if you close your eyes and listen to it clearly, has a more positive feeling. Still always with a dark tone in it, something tellling the listener that there is hope… after passing first through suffering. This is the kind of music that one simple listen will not be enough. The production values are also simply perfect, I think that especially the drum sound is great. And yes, expect some clean vocals which fit perfectly to the mood the band is creating. I myself, as a very traditional Metaller, have no difficulties in enjoying this band, and I am sure many others won’t have either. www.facebook.com/aldacascadia, www.facebook.com/eisenwaldofficial