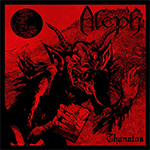 Italy is known for its diverse Metal, such as MORTUARY DRAPE, who change tempo and sounds from track to track, album to album. And ALEPH is no different. Fueled by excellent musicianship in a quest to provide a new way to look at Metal, ALEPH’s progressive style also includes a little Thrash and a little Death Metal thrown in for good measure. Keyboards show up from time to time, lingering in the background without intruding. The first track ‘The Snakesong’ is probably the most upbeat track with furious guitars, distant keyboards, in-your-face vocals, and ever-changing drums. The chugging rhythms of ‘The Old Master’, with driving drumming, push their third full-length forward with a steady diet of fist-pumping Metal. ‘A Game Of Chess’ slows it down a bit with sinister mutterings before picking up a minute of two in with progressive overtones. ‘The Severed Skull’ begins mellow, but gains a little momentum in a mid-paced jog with thrum-thrumming of guitars and no vocals. ‘Fire Demon’ delivers more progressive meanderings and spoken-word vocals, while keyboards take a more prominent role. Blasting bass drumming heralds the final minute or so of the track. ‘Nightmare Crescendo’ becomes a thrashy mosh-infused track to liven things up, and taking the album in yet another direction. A piano and guitar-laden instrumental, ‘Sea of Darkness’ segues into the second half of the hour-long album. ‘Thanatos’ begins like a theme song to an 80s horror movie before breaking into a steady, mid-paced old school Metal track. The instrumental ‘Winterlude’ interrupts the momentum as ‘Smoke And Steel / Interludes’ takes off running with a more upbeat track. ‘Still Inside’ brings everything to a halt again in a non Metal atmospheric track with narrative vocals and climbing keyboards. As the album starts to trail off into a sideways path, the thirteenth track ‘A Renegade’s Path’ bowls us over with a galloping, heavier track to bring it all together. The final track ‘Remains / Remained’ is ALEPH’s ‘Revolution 9’, which actually plods, experiments, and stretches waaayyyy to the point of no return. Thank god it’s the final track, so once the Metal’s finished, you can easily just hit the stop button. If you want constant headbanging, this album may not be for you. However, if you want ever-changing, intelligent Metal with outstanding musicianship, then give "Thanatos" a try. For more info, check out www.facebook.com/pages/aleph/49314707850, www.facebook.com/b2krecords