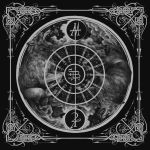 Among all kinds of release types, splits always carry special values as they represent alliance and unison; which also provides all the reasons to follow and explore them deeply. In literary sense, splits collide separate worlds and here, ALMYRKVI from Iceland and THE RUINS OF BEVERAST from Germany, joined together and released this split, in co-operation with prestigious Ván Records. ALMYRKVI is an Icelandic atmospheric Black Metal duo, with a prior EP and full-length release to their name. THE RUINS OF BEVERAST is the atmospheric Black / Doom creation of Alexander von Meilenwald. While both bands being no strangers to split releases, this exquisite four tracker sees both at their optimum with two songs from each band. The Icelanders ALMYRKVI so far have only one album “Umbra”, but behind the project there are prominent names of the Icelandic Black Metal scene with Bjarni Einarsson (drums, including SINMARA, WORMLUST, SLIDHR) and Garðar S. Jónsson (guitars, vocals – also SINMARA and SLIDHR). In contrast to the first demo and the first album, the songs provided here are abrasive by means of down-tuning and chaotic riffing. The ambient interludes, primordial roars, solid bass kicks, deep grunts and enchanting guitars created the atmosphere of the opener ‘Asomatous Grave’, which can better be explained as flowing melodies, like from the very bowels of the planet itself. Whereas, ‘Managarmr’ is a bit rabid on the road and offers musty and aggressive Black / Death Metal, but also has the captivating Icelandic dissonances that elevated the mind-bending ferocity. Here too, at least a little loosened up by a few melodic leads. Definitely a track that doesn’t accessible immediately, but it stays stirring and also reveals more by each repeat. The first half of the split, which is a little over 20 minutes, ends to welcome the second half. The primeval and otherworldly excellence of THE RUINS OF BEVERAST is quite unmatchable and since the release of their fifth full length “Exuvia” in 2017, the sole ruler, Alexander Meilenwald, took his time to forge the next offering and published their first split in 2020 with MOURNING BELOVETH. The tracks on this split, carry on the one hand the meditative, shamanic direction of “Exuvia”, but also have phrases and passages in accumulation that are connected to “Blood Vaults”, “Foulest Semen Of A Sheltered Elite” and “Unlock The Shrine”. ‘The Grand Nebula Pulse’ is based entirely on the meditative atmosphere with trademark repetition, and a wonderfully growling bass that provides the rhythm framework; whereas ‘Hunters’ comes with more speed, dissonant and aggressive riffs, somewhere groove in the gloom, and hardly any vocals. In the end, a breathtaking resolution with a classical melodic guitar solo, birthed clandestine and mystical experience, distinctive of THE RUINS OF BEVERAST. For those who do not yet know both bands, this split shall be more than a pleasant introduction. For the others, this is simply a piece of work, that should be experienced and included in your collection. Explore more about the bands at www.facebook.com/almyrkvi, www.facebook.com/the-ruins-of-beverast-116265971848680 or visit their label page www.van-records.de.