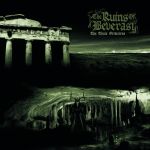 THE RUINS OF BEVERAST
The Thule Grimoires
(Ván Records)
69:25min

“The Thule Grimoires” is the 6th full length of THE RUINS OF BEVERAST. After 2 phenomenal splits last year, the new release on Ván Records perhaps provides the best avatar of THE RUINS OF BEVERAST as we know. The atmosphere on the entire album is incredibly intense, it drowns you in it entirely. The album opens with ‘Ropes Into Eden’ a twelve and a half minute track that showcases everything “The Thule Grimoires” is about. It is a vista of bleakness, the guitars are dripped in sorrow and the atmosphere is slowly adding to the misery of all the instruments. The vocals add in a veritable shade of darkness. Not many bands can manage to keep you hooked with lengthy songs but with THE RUINS OF BEVERAST, it’s usually a story weaved in string and mist. The sound clearly borrows a glimpse or two from early TIAMAT and the dark vocals take us back to TYPE O NEGATIVE. At places, it’s amazing how well the vocals get in sync with the rest of the music adding in another layer to the suffocated room of heaviness. Midway of ‘The Tundra Shines’ the vocals ease into a low end chanting, that simply glazes through the surface of the riffs, while the drumming gently compliments it all. This is almost psychedelic, easing in and out of earthly dimensions gently with every passing moment. This is on a full display during the second half of ‘The Tundra Shines’ which is a magnificent display of songwriting. Immediately comes in ‘Kromlec’h Knell’ where the confluence of the guitars and vocals help soften the tired mind. With vocals like this THE RUINS OF BEVERAST could preach the dystopian beauty of atmospheric Black Metal coupled with Doom the world across. It’s absolutely amazing! No, this isn’t the first band to perfect this sound but the ease with which they do is stellar! The second half of the album brings another layer into the existing wealth of darkness, beginning with the track ‘Mammothpolis’, the early TIAMAT influences kick in full time and it’s wonderful to see this unique marriage of the mystic sounds with the primal modes of expression. It’s hard to pick one track off this album as an absolute standout. Every song has something different to offer and completes this album in its own rather unique way. This is perhaps one of the best starts to the year and ought to be a definite contender to album of the year! Highly recommended, do get a copy. For more information please visit: www.facebook.com/the-ruins-of-beverast-116265971848680, www.van-records.com