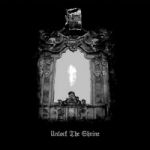 THE RUINS OF BEVERAST
Unlock The Shrine
(Ván Records)
70:27min

“Unlock The Shrine” is the debut album of one of Germany’s finest and best Black Metal projects / bands. Project, because the only man behind this is Alexander v. Meilenwald, probably known from NAGELFAR. But THE RUINS OF BEVERAST is something really different, it is much more oppressive and by far blacker. “Unlock The Shrine” brings forth 6 black metallic songs interrupted by 6 ambient based sound-buildings. Musically wide-ranging with slow, doom-like parts, pounding mid-tempo hymns and fast, aggressive attacks this album shows a lot of Black Metal’s facets. And what’s really magic, throughout the whole opus it reveals the same strong dose of black and oppressive atmospheres, from the first to the last second, without getting boring and without repeating itself. So, “Unlock The Shrine” is a real jewel and you should not miss this one, either on CD or on upcoming DLP at the WOD-VAN; www.wod-van.de