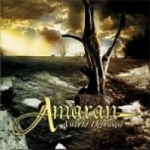 It was a time when the bands struggled hard to secure a deal, passing through the trial of several demos before winning the right to see themselves signed. It was for the better I think, because the musicians were conscious they have to give the best of themselves to make their first impression, here is the explanation why a lot of classic albums surfaced in the 80s. Now the situation is entirely different, thanks in particular to the internet, the home studios and the label proliferation due to the easy process to burn some music on a CD. Quantity has taken over quality as virtually anybody can release an album now and so did AMARAN (formed in Stockholm in the spring 2000) by the way. Do we really need an album like this? The answer is obviously no. One listen suffices to understand that AMARAN is a hopeless case. Because let’s face it, it is not because you have gifted musicians and a superb production that you automatically come up with a great album, especially if you forgot to compose catchy and captivating songs. The ten tracks on offer on “A World Depraved” are all based on the same mid-paced pattern, and I see AMARAN trying hard to express deep emotions but they fail in the end, especially because the monotonous and irritating voice of singer Johanna De Pierre who uses mainly her medium range (but does she possess another one anyway?), and the lack of passion showed by the musicians. You could even imagine that AMARAN entered the studio to do a daily job and nothing more. Like I said before, the production is the highest quality of this album, a pity it is wasted on such uninspired songs. If you are familiar with Erik Rutan’s ALAS, I can say that AMARAN could be seen as a more Heavy Metal version of this kind of band, that’s all. To be perfectly honest, I listened to this album one time and one time only, and I will not repeat the experience in a very near future to say the very least. Enough said and excuse me for this boring review, but I think it mirrors in a very proper way what you could find on this anemic album.