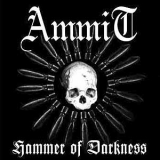 AMMIT
Hammer Of Darkness
(From Beyond Productions / Displeased Records)
38:54min

This album is released by From Beyond Productions (a sub-label of Displeased Records), which is specialised in releasing more or less rare and occult underground stuff. And AMMIT from Chile definitely fit into that frame. The history of this band goes back to the year 1991, when it was founded by the main-man Count Czar Yang. Due to the fact that he refused to do the “normal” promotion, like giving interviews or even taking pictures, the band remained unknown to most Metalheads, including me. After recording three demo-tapes, they released their first album in 2003 and now present us their third one. Well, the music can be described as crude Thrash Metal, like the early SODOM or KREATOR releases. Some years ago there has been a wave of retro-Trash Metal, but AMMIT has nothing to do with that, they play more raw and chaotic. In fact some songs, like the title-track, start in a normal Thrash Metal sound and then totally tipping over into pure Grindcore. The vocals are sometimes also just pure screaming, so I wonder if there are any lyrics in some songs. I guess the “concept” behind AMMIT is to create just pure evil darkness by using Thrash Metal as a kind of framework. This concept is underlined by the strange booklet, which features (among other weird stuff) a picture of Saddam Hussein saying “I love AMMIT”. For me, “Hammer Of Darkness” really was a refreshing experience, but I guess some people will just recognize AMMIT as pure noise. So if you are willing to make a new experience beyond the “normal” way of extreme music, then check out this release. Needless to say that the production and sound on this output is more in the vein of a rehearsal tape, but remember, it is all part of the concept to spread evil and darkness.